Treasure Island Street Closure
In preparation for the Oracle Openworld annual event, the following streets are closed or inaccessible and will continue until 9 p.m., Monday, Oct. 7:

· California Avenue between Avenue “D” and the eastern edge of the Island
· Portions of Avenues “H”, “M” and “N”

The 108 Treasure Island Muni route will be affected during the street closure.

The following street closures will be required from 12 a.m., Saturday to 8 p.m., Sunday:

The following street closures will be required from 12 a.m., Saturday to midnight, Sunday:
· Beach Street between Larkin and Polk streets
· Polk Street between North Point and Beach streets

The 19 Polk Muni route will be affected.

Both Saturday and Sunday, Muni will continue to provide supplemental transportation services to welcome the America’s Cup sailing fans and to keep the city moving:

The following supplemental transportation service will be provided if races are to take place on Sunday:

· MM-Market-Marina bus shuttles from Civic Center BART/Muni station to Bay & Fillmore near Marina Green will run between 10:30 a.m. and 7:30 p.m. 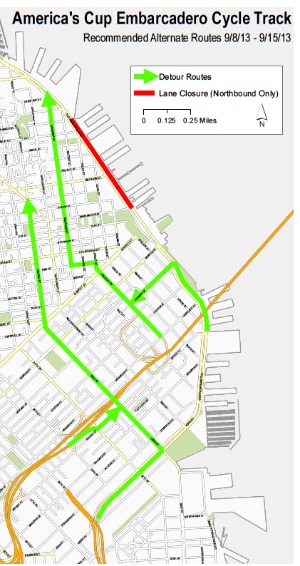 REMINDER: Temporary Embarcadero Cycletrack
As a reminder, the right-hand travel lane of northbound The Embarcadero between Washington Street and Pier 23 has been closed temporarily for the implementation of a two-way cycletrack for the America’s Cup Finals races. This temporary cycletrack will end at 9 p.m., Sunday.

This bikeway runs between Washington Street, north of the Ferry Building, to the midblock pedestrian crossing at Pier 23, between Lombard and Green streets. The facility has been providing additional capacity for bikes in the areas that are expected to experience the greatest number of visitors to the America’s Cup events.

Police barricades have been used for the cycletrack. There are gaps at each intersection and midblock crossing. Local, loading and emergency access are allowed.

No parking has been allowed along the east side of northbound The Embarcadero while the bike facility is in place. There are signs to alert drivers of the lane closure.

The SFMTA recommends motorists travelling northbound in the vicinity of The Embarcadero to allow plenty of travel time and to use Sansome Street or Kearny Street as alternate routes. For details of traffic re-route, please refer to the map to the right.