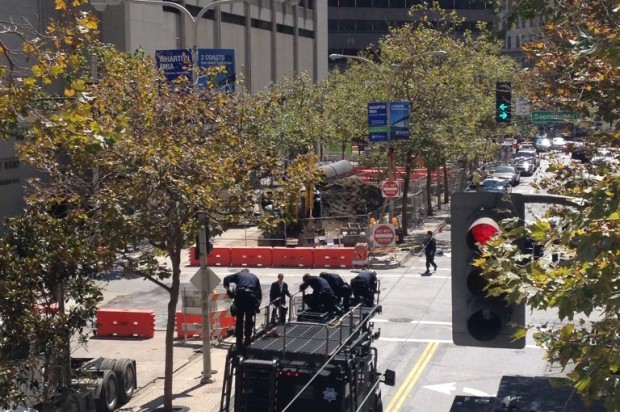 A man arrested earlier this week after allegedly throwing rocks at officers while standing semi-nude on the ledge of a building in San Francisco’s Financial District was convicted for similar crimes five years ago.

The man, identified by police as 25-year-old William Quezali, 25, of Santa Rosa, was reportedly shirtless near the promenade at Four Embarcadero Center on Drumm Street Monday afternoon.

When police responded Quezali allegedly wielded a knife and got onto the ledge of the building and threatened to jump, police said.

A long standoff ensued during which Quezali allegedly vandalized a window on the building and threw concrete chunks and bricks at officers, according to police.

He was eventually coaxed off the ledge and taken into custody around 12:15 a.m., police said.

He was evaluated at San Francisco General Hospital before he was arrested on vandalism, trespassing, delaying a peace officer, brandishing a weapon, and disturbing the peace charges, police said.

Police said he is the same man who stood on to of a “Do not enter” sign on Drumm Street between Clay and Sacramento streets last Friday morning.

In that incident, he disrobed at one point and stayed on the sign for several hours, prompting police to shut down the street. He came down that afternoon and was taken to SF General for a psychiatric evaluation.

The San Francisco District Attorney’s Office has filed two felony charges against Quezali for threatening an officer and felony vandalism.

According to court documents, Quezali was convicted and served time in state prison for threatening an officer and possessing a deadly weapon in San Mateo County in May 2008.

He is scheduled to be arraigned on Tuesday.