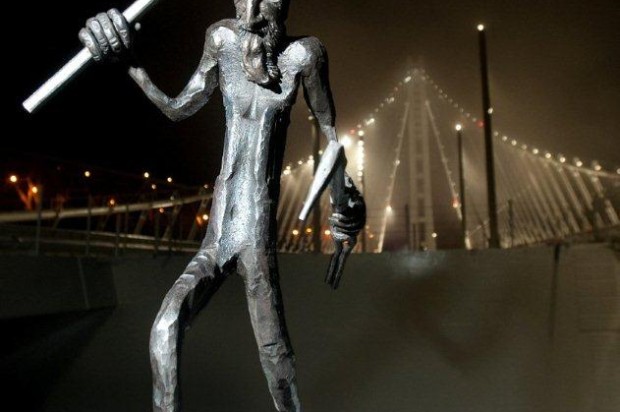 Bay Area transportation officials today briefly discussed the existence of a good-luck troll on the new eastern span of the Bay Bridge but were reluctant to provide many details about it.

Peter Lee, principal transportation engineer with the Metropolitan Transportation Commission, told members of the Bay Area Toll Authority at their monthly meeting, “There is a troll on the new bridge.”

However, Lee wouldn’t disclose the troll’s location, saying only, “It’s somewhere on the bridge.”

The new troll is aimed at carrying on a tradition that started in late 1989 when iron workers place a good-luck troll on the eastern span when they replaced a slab of bridge deck that collapsed in the Loma Prieta earthquake on Oct. 17 of that year.

The old troll was created by local artist and blacksmith Bill Roan.

Lee said the old troll was recently removed from the old eastern span, but he told committee members, “Don’t ask me where” it’s now being stored.

When Berkeley Mayor Tom Bates pressed the issue and asked where the old troll was, MTC Executive Director Steve Heminger said only that “it’s at a secure undisclosed location not on the bridge.”

After the meeting, MTC spokesman John Goodwin provided bits of additional information, confirming that the old troll was removed the night of Aug. 28, the first night the Bay Bridge was closed for last-minute work so the new span could open on Labor Day.

Goodwin would not specify where the new troll has been placed, saying that it might be somewhere on the new span or inside a steel section of the span.

He said the troll’s current location is only temporary, and that transportation officials are trying to find it a permanent home that meets several important requirements.

Goodwin said trolls don’t like to be exposed to sunlight, so officials want to find a shaded location. He noted that the new troll was placed on the bridge only after the sun had gone down on Labor Day.

Goodwin said another requirement is that the new troll be visible “to those who seek it out” so officials want to place it where it can be seen, such as by people who go under the bridge on a boat or by people who use the bike and pedestrian path on the new eastern span.

He said the new troll was donated, and no public funds were used to pay for it.

Both trolls “appeared without official sanction,” and the Bay Area Toll Authority has adopted a policy of “benign non-interference” in allowing them to be placed on the bridge, Goodwin said.

He said the new troll is crafted from steel, is slimmer than the old troll, stands upright, and holds a sledgehammer.