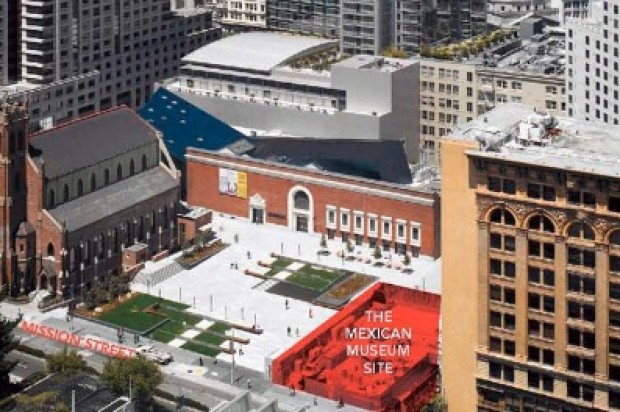 San Francisco officials today welcomed The Mexican Museum to its future home in the city’s Yerba Buena neighborhood, where it will join several other museums dedicated to cultural history and the arts.

The museum, currently located at Fort Mason, is scheduled to move in 2018 to its new location at 706 Mission St., where it will occupy the first four floors of a mixed-use tower.

Mayor Ed Lee joined other city officials today to welcome the museum to its planned new home, located off of Jessie Square Plaza near the Contemporary Jewish Museum and St. Patrick’s Church.

Lee said the museum, which is San Francisco’s lone affiliate to the Smithsonian Institution in Washington, D.C., is an example of art and cultural institutions that provide an estimated $1.7 billion in visitor spending in the city annually.

He said, “Where else in the world can you find such a beautiful gem of a museum?”

Today’s event was also on Mexican Independence Day, which city Supervisor David Campos said was fitting because of the museum’s commitment to celebrating Mexican history.

The Mexican Museum features more than 14,000 objects from various eras of Mexican history as well as other Latino art, but museum officials say the Fort Mason site is too small to show all of the artwork.

The museum was founded in 1975 and initially started in the city’s Mission District before moving to Fort Mason seven years later.

The project at 706 Mission St. was approved unanimously by the city’s Board of Supervisors in July.

More information about The Mexican Museum can be found on its website at www.mexicanmuseum.org.