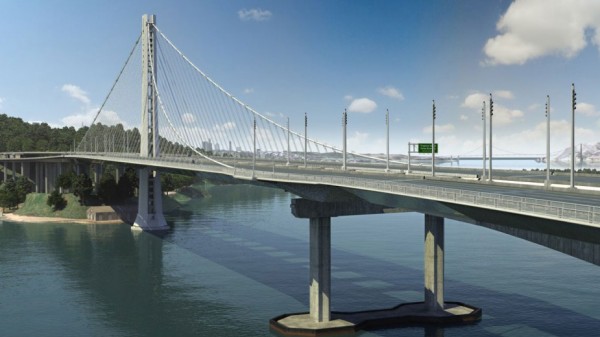 The Bay Bridge is back open with a brand-new, seismically safe eastern span, and the California Highway Patrol is reporting that things went smoothly during this morning’s commute.

No collisions were reported, despite many motorists craning their necks to gaze up at the new white tower as they passed beneath the cascade of cables streaming down to the deck.

While many people are taking photos and videos to document their first trips across the span, CHP Officer Sam Morgan recommends that drivers keep their eyes on the road and passengers keep their arms inside cars while acting as videographers.

Another option is to walk out onto the new pedestrian path and take photos or video from there, Morgan said.

He said one motorist illegally pulled over near Yerba Buena Island in a Caltrans-only area to take pictures of the bridge’s old eastern span this morning, Morgan said.

The man was given a verbal warning and told to keep moving
.
Morgan said there was also a DUI arrest on the bridge near the toll plaza in the eastbound direction around 2 a.m.

Other than that, he said no problems were reported.

Jennifer Capps, a data analyst who crossed the bridge into San Francisco from the East Bay this morning as part of her commute, said the new span is “cleaner” than the old span.

Jim Morrisroe, CEO of San Francisco-based Piston Cloud Computing, tweeted “The new Bay Bridge was pleasant today! But, I’m not sure I got my full $6.4 billion worth yet.”

The Golden State Warriors tweeted “Congrats to all involved in the opening the new span of the #BayBridge We’re obviously big fans.”

The new span’s bicycle and pedestrian walkway is set to open around midday today.