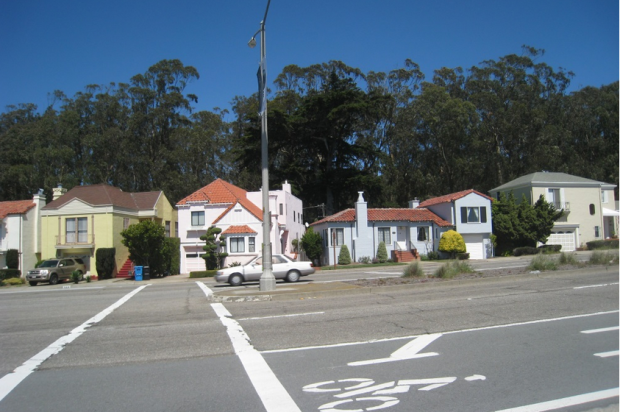 A new traffic beacon was unveiled today to improve pedestrian safety on a thoroughfare in San Francisco where a high school girl was killed earlier this year.

The new system of yellow and red lights was installed on Sloat Boulevard at Forest View Drive, where Lowell High School student Hanren Chang, 17, was killed by an allegedly drunk driver as she crossed the street on March 2.

Supervisor Katy Tang, who represents the area, said the traffic beacon is the first of its kind in San Francisco and only the second in the state.

The lights facing traffic remain blank until a pedestrian presses the button to cross the street, then flash yellow, then change to a steady yellow light and a steady red when it is time for the pedestrian to cross.

The lights will then blink red, meaning drivers should treat it as a stop sign and travel through the intersection only when the pedestrian is safely across the street.

Tang said many community members had already been pushing for improved pedestrian safety measures before Chang’s death, and those calls only increased afterward.

“We want to make sure you feel safe crossing the street here,” she said.

Anyan Cheng, a friend of Chang’s, started an online petition asking the city to put up a signal at the intersection, saying pedestrians before “had to wait and hope drivers were nice enough to stop.”

Cheng said, “I’m definitely happy that the city listened to the voice of the community,” saying Lowell High students were particularly grateful since many get dropped off right at that that intersection by the 23-Monterey San Francisco Municipal Railway bus.

Chang’s parents also attended today’s unveiling ceremony and said it was a bittersweet day in the wake of their daughter’s death.

Wenhan Chang, the girl’s father, said, “It’s bitter as it reminds us of the tragic event several months ago, however it’s sweet to know that my daughter’s sacrifice is not in vain.”

He called on pedestrians to be alert and vigilant while crossing streets and for motorists to not drive under the influence or while distracted.

San Francisco Department of Public Works director Mohammed Nuru said the $690,000 traffic beacon project was important on Sloat Boulevard, which he said has become a major street for traffic in the city.

San Francisco collaborated with Caltrans on the project because Sloat Boulevard also serves as state Highway 35 as it connects Skyline Boulevard to the west with state Highway 1, city officials said.

Nuru said the city is also soon installing another beacon, located at Sloat and 23rd Avenue, as well as putting in curb bulb-outs and other pedestrian improvements along the street in the coming months.

Police Capt. Curtis Lum said officers are also increasing patrols of the area and focusing on speeding drivers.
More information about the Sloat Boulevard improvements can be found on the SFDPW website at www.sfdpw.org/index.aspx?page=1688.