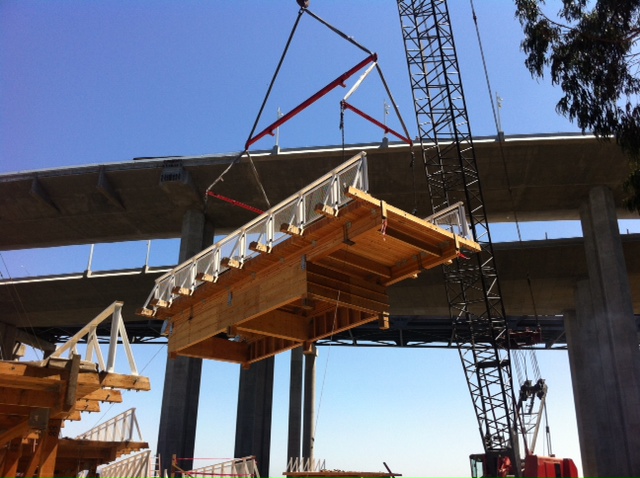 Weekend construction work is proceeding as planned on the new eastern span of the Bay Bridge, which is on schedule to open to traffic early Tuesday morning, a bridge spokesman said today.

“We haven’t encountered any problems beyond the occasional slowdown that you’d expect with any construction project,” spokesman Andrew Gordon said of work taking place since the bridge closed Wednesday night.

Crews have been paving the roadway on east and westbound portions of the new 2.2-mile span, installing barriers, power-washing the Treasure Island tunnels, polishing lights, and demolishing part of the old approach to the eastern span from Oakland, Gordon said.

On Sunday, crews will finish paving an area around the toll plaza and continue painting lane stripes on both directions of the new portion of the bridge, Gordon said.

The work was progressing as planned and the bridge was expected to open to the public at 5 a.m. on Tuesday, Gordon said. As of this morning, there were no plans to open any earlier.

“Everyone wants to open the bridge as quickly and safely as possible,” Gordon said. “At this time we know the bridge will open at 5 a.m. on Tuesday.”

Elected officials and local luminaries were expected to attend a ceremonial “chain-cutting” near the toll plaza on Monday afternoon, though Metropolitan Transportation Commission spokesman John Goodwin was tight-lipped about naming attendees.

“The list is very fluid,” Goodwin said. “There will be a special guest, but I’m not naming any names.”

BART ridership swelled to its second-highest Saturday ever as the agency increased weekend trains between San Francisco and the East Bay to accommodate the Bay Bridge closure.

BART registered an estimated 278,858 trips on the system on Saturday, second only to Oct. 6, 2012, when a record-breaking number of passengers boarded BART to travel to a full plate of events around the Bay that included Fleet Week, America’s Cup races, a Giants baseball game, the Hardly Strictly Bluegrass Festival in Golden Gate Park, and a Justin Bieber concert.

The most current information on the opening of the Bay Bridge is available online at www.baybridgeinfo.org.