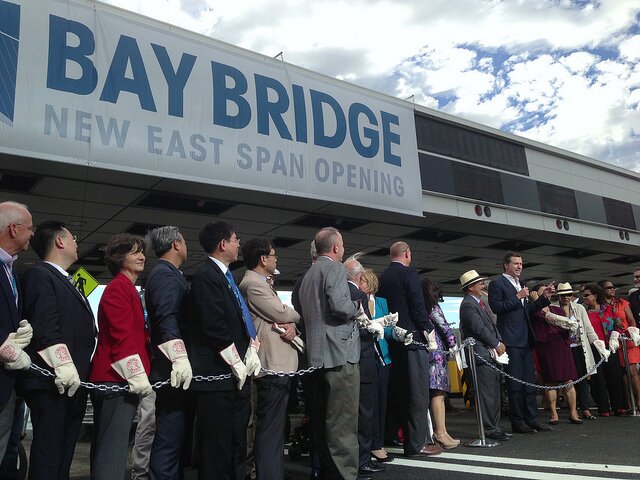 Elected leaders and transit officials today held a ceremony in Oakland to celebrate the imminent opening of the new eastern span of the Bay Bridge.

The ceremony, attended by hundreds of invited guests near the bridge’s toll plaza, comes just hours before the anticipated opening of the new self-anchored suspension span connecting Oakland to Yerba Buena Island.

A larger public celebration of the bridge was scrapped after broken anchor bolts on the new span left the opening date in limbo.

A temporary fix was eventually devised and the bridge was shut down last Wednesday to begin the final preparations to open the new span.

The bridge will reopen by 5 a.m. Tuesday, although Caltrans director Malcolm Dougherty said it will reopen sometime tonight, although he declined to give an exact time.

Several speakers at today’s ceremony remarked upon the lengthy process of getting the new span designed and built after the 1989 Loma Prieta earthquake collapsed part of the upper deck of the old cantilever bridge, which opened in 1936.

Metropolitan Transportation Commission executive director Steve Heminger cited the many challenges faced during the project, some with technical issues like the broken bolts and others involving political battles over the span’s design that led to escalating costs.

The bridge is opening “at long last,” Heminger said. “This truly is a landmark event.”

State Sen. Mark Leno, D-San Francisco, said legislators “will review and learn from our mistakes” to ensure that similar delays and cost overruns do not happen on other large infrastructure projects in the state.

Other speakers chose to highlight the beauty of the bridge, including San Francisco Mayor Ed Lee, who said the new span “serves as a monument to creativity and ingenuity,” while state Sen. Loni Hancock, D-Oakland, said it will serve as “a gorgeous piece of public art” in the Bay Area.

Many gave praise to the workers who helped construct the new span and said it was fitting that the bridge was opening on Labor Day.

The keynote speech was given by Gavin Newsom, the state’s lieutenant governor and the former mayor of San Francisco. Newsom said the wait will be worth it for the beautiful new bridge.

Newsom was given the honor of cutting a ceremonial chain in front of the toll plaza, then joined other officials and guests in 1930s-era vehicles for an inaugural procession across the bridge.