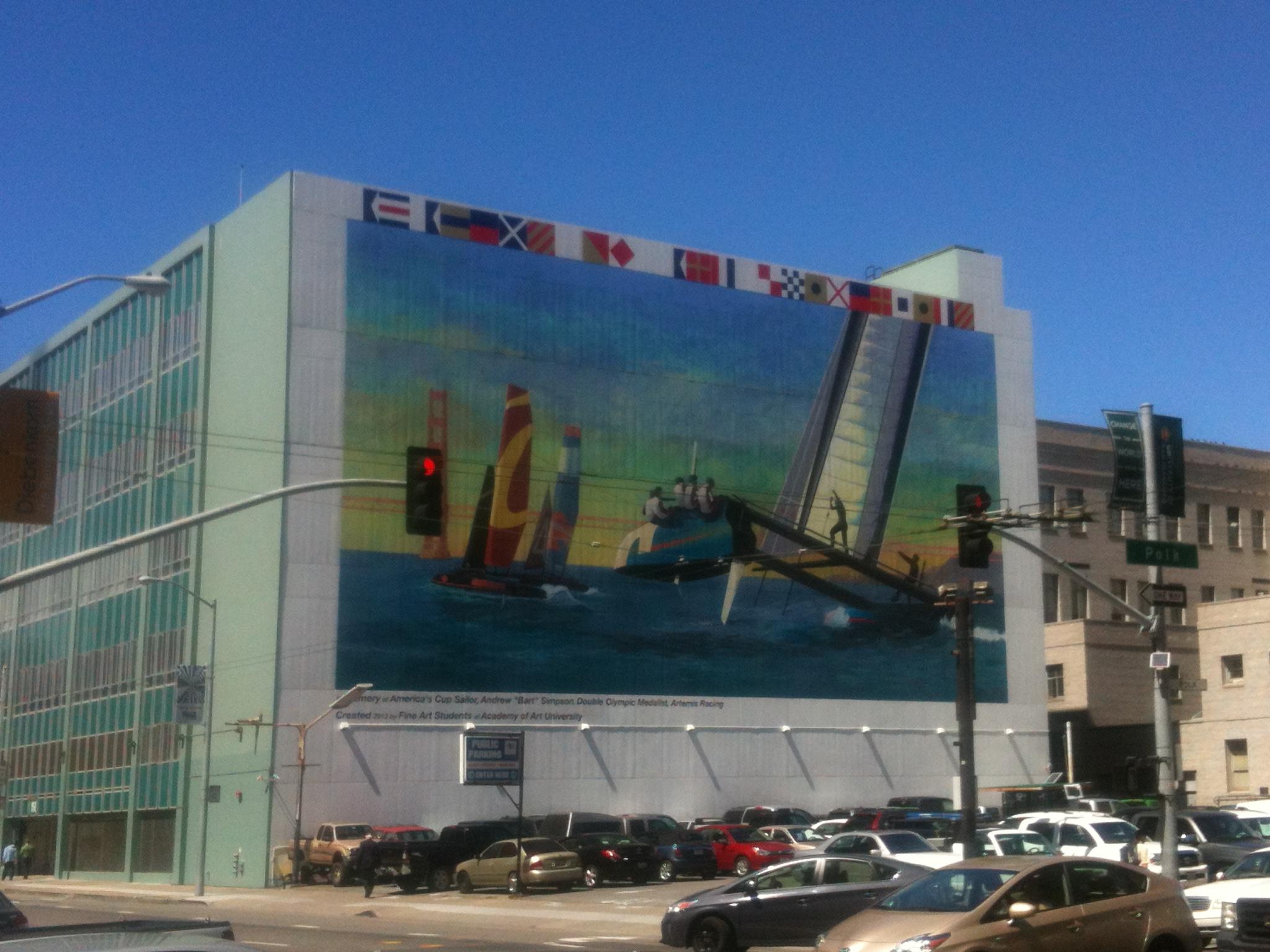 12:42 PM: A group of Academy of Art University artists who created a large public mural depicting a sailing scene on the San Francisco Bay were on hand this morning to honor fallen Artemis Racing sailor Andrew “Bart” Simpson.

The mural, located at Hayes and Polk streets, was dedicated this morning to 36-year-old Simpson, a British sailor who died after his team’s boat capsized on the Bay on May 9 during a practice run.

The Artemis Racing team was preparing for the preliminary races of this year’s America’s Cup, which inspired the 116-by-50-foot mural painted on the side of a university-owned building at 150 Hayes St.

The artwork depicts three boats sailing near the Golden Gate Bridge, and was completed in late May after about four months of design work.

After Simpson’s death, a message was added at the bottom of the mural that reads, “In memory of America’s Cup sailor Andrew ‘Bart’ Simpson, Double Olympic Medalist, Artemis Racing.”

More than a dozen of the 18 fine art students who helped create the artwork stood beside university president Elisa Stephens this morning as she credited the group for working “diligently on this beautiful mural.”

She called the process “an experience that they’ll never forget,” noting that the work included climbing up scaffolding to reach the highest parts of the wall.

Stephens said this is the largest public mural the university has ever produced within San Francisco.

Artemis team member Iain Percy, a skipper and longtime friend of Simpson’s, spoke on behalf of the Sweden-based team and Simpson’s family.

“What he really enjoyed was working together with a team of people,” Percy recalled.

He said the artists’ team effort and passion would be something Simpson would have been proud of and humbled by.

The students presented Percy with a framed painting of the mural, which Percy promised to pass along to Simpson’s family.

The students signed the back of the painting, including Kris Liwanag, 24, who graduated this spring.

Liwanag said that after hearing about Simpson’s death, “it made us feel like we had to put more art and soul into it.”

As part of the making of the mural, the team of students immersed themselves in the nautical world, studying the 72-foot catamarans and watching the America’s Cup teams in their practice runs, he said.

Fellow artist Steven Stodor, who also recently graduated, said the group worked well together and that everybody contributed different portions of the mural.

He researched international maritime signal flags and used those images on the top of the wall to spell out “Academy of Art University.”

Racing in the America’s Cup Finals between Oracle Team USA and Emirates Team New Zealand begins on the Bay this Saturday.

More information about the races can be found online at
www.americascup.com

8:19 AM: A mural of America’s Cup sailing boats in San Francisco is being dedicated today to a sailor who died during a practice run for the regatta earlier this year.

Family members of Andrew “Bart” Simpson plan to attend the dedication ceremony for the mural, which was painted by students from the Academy of Art University on the side of a building at 150 Hayes St. near Polk Street, school spokeswoman Susan Toland said.

Simpson, a British sailor with the Sweden-based team Artemis Racing, died after the team’s boat capsized on the Bay on May 9.

Painting on the America’s Cup mural began in January and finished in late May, Toland said. She said a line of text was added to the mural in honor of Simpson after his death.

The dedication ceremony has waited until now “out of deference to the family” of Simpson, Toland said.

The 116-by-50-foot artwork of America’s Cup boats racing on the Bay was created by 18 students in a mural class in the Academy of Art University’s School of Fine Art, according to Toland.

She said the students researched the boats for accuracy in the mural and completed the painting on the side of the school’s Hayes Street building by the end of the semester.

Racing in the America’s Cup Finals between Oracle Team USA and Emirates Team New Zealand begins on the Bay this Saturday.