Stockton Street between Union and Filbert streets will be closed from 6 a.m. to midnight, Saturday.

The 39-Coit Muni route will be affected.

The following street closures will be required from 6 a.m. to 6 p.m., Saturday:
· Scott Street between Hayes and Fulton streets
· Grove Street between Scott and Divisadero streets

There will be bus shuttles from Mission Rock and Third streets to Market and Spear streets via Embarcadero and Caltrain stations.

Customers should board on buses at nearby marked bus stops.

Muni will continue to provide supplemental transportation services to welcome the America’s Cup sailing fans and to keep the city moving:

· E-Embarcadero Streetcar line from Caltrain to Beach and Jones will run between 11:00 am and 7:00 pm.

· MM-Market-Marina bus shuttles from Civic Center BART/Muni station to Bay & Fillmore near Marina Green will run between 10:30 a.m. and 7:30 p.m.

The SFMTA will provide additional service on F Market-Wharves bus line before and after each event: 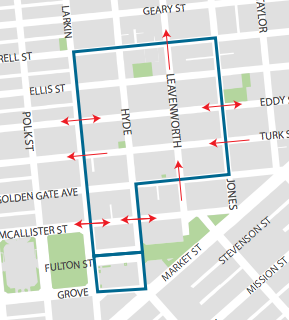 The sixth Sunday Streets events for this year will be held Sunday in the Civic Center and Tenderloin neighborhoods. This event covers a 2.5-mile route that encompasses City Hall and Civic Center Plaza and will travel along Grove, Larkin, O’Farrell, Jones, Golden Gate and Hyde streets. The route will be available for recreational activities from 11 a.m. to 4 p.m. The event is free to all participants.

The headquarters for the event will be located in Civic Center Plaza, where participants can get details about activities along the event route as well as free bike rentals.

Cross traffic will be allowed at the following locations:

Traffic will be controlled by Parking Control Officers and San Francisco police officers.