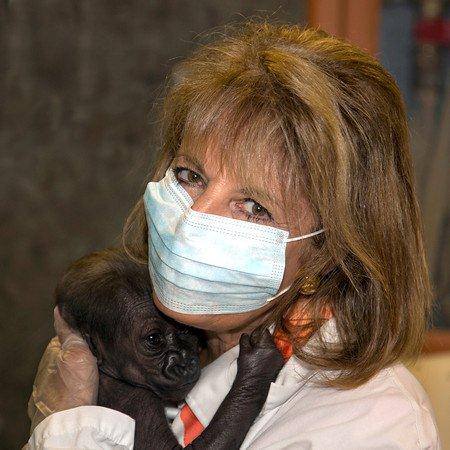 U.S. Rep. Jackie Speier helped kick off a naming contest today for a baby gorilla during a visit to the San Francisco Zoo.

Speier, D-San Mateo/San Francisco, visited the zoo today for a tour of its Elinor Friend Playground, which is currently being renovated, according to zoo officials.

While there, the congresswoman was given a chance to visit the zoo’s new 1-month-old baby gorilla, born July 17, which she described as a “little princess,” zoo officials said.

Speier said in a statement that the gorilla was “much stronger than I suspected from looking at her tiny face and body.”

“She did what all babies do, pull on my hair, grab on to my fingers and yes, even have a little accident,” Speier said.

The baby gorilla is currently getting settled in to her troop. The public can view the gorilla on a closed-circuit television feed for several hours each day at the zoo.

Zoo officials are currently planning an early November debut for the baby in the gorilla exhibit.

Those interested in suggesting a name for the baby gorilla can submit their choice to namethebaby@sfzoo.org between today and Sept. 17.

The public will then be asked to vote on the top contenders by voting online or by making donations in favor of their choice at the zoo. The winner will be the first option to reach $50,000 or the one with the most donations when the baby goes on public display.

All donations collected during the contest will go toward caring for the baby gorilla, zoo officials said.

The Elinor Friend Playground is scheduled to reopen on Thanksgiving weekend.