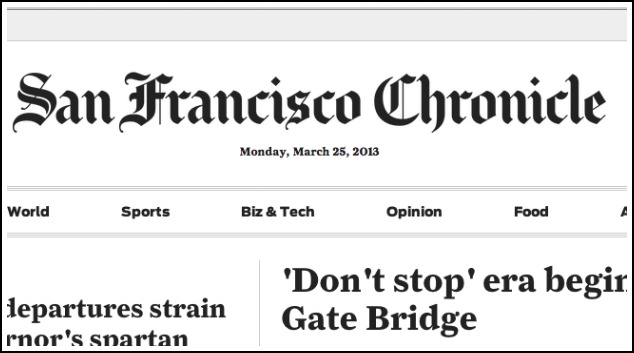 According to present and past San Francisco Chronicle staffers, the newspaper’s brief experiment in charging for at least part of their online content has ended only a few months after it began. However, the only official line from an SF Chronicle spokesperson is “no comment.” (Update 7:40 PM: The Chron has released a statement confirming that “all Chronicle” content will now appear, for free, on SF Gate. The full statement appears below.)

It was March 24 of this year when we discovered that the SF Chronicle had, at least in part, been placed behind a paywall.

In an article posted to SFGate that March weekend, Mark Adkins, who was then “President SFChronicle and SFGate”* wrote that “premium stories and columns” would be on the subscription-only SFChronicle.com, while the paper’s archives, breaking news and “popular features like Daily Dish and Day in Pictures, event listings and guides” would be found on SFGate.com.

In other words, Newton says that things had gone back to the way they were on March 23rd. In a subsequent twitter conversation, Newton pointed me to this tweet from SF Chronicle music writer Aidin Vaziri, who told his 4,380 followers “Good news: All San Francisco Chronicle content will once again be available for free on @SFGate. You can finally read my stuff.”

Good news: All San Francisco Chronicle content will once again be available for free on @SFGate. You can finally read my stuff.

A quick, unscientific runthrough of content on SFChronicle.com seems to confirm this. I was not able to find a single report from today that was exclusive to SFChronicle.com.

However, that information has yet to travel to the folks in charge of your (now possibly pointless?) digital subscription — when I called this afternoon to figure out if I should now cancel mine, the poor lady I spoke with at the call center said that they hadn’t been informed of any changes.

Similarly, the SFChronicle.com FAQ continues to imply that that website contains exclusive content, and the front page of SFGate advertises “Bay Area insider news, analysis & columnists available only with an Ultimate Access Subscription” to “the new” (oh, boy) SFChronicle.com.

After I emailed SF Gate News Director Vlae Kershner to confirm Vaziri and Newton’s tweets, I received a call from SF Chronicle marketing director Michael Keith, who said he was “looking into” the business change and “something I can forward to you.”

In a follow-up call, however, he said that the only thing he could say was that they “had no comment at this time.”

Obviously, this raises a lot of interesting questions. What’s the future of SFChronicle.com? Sure, it looks pretty, but is looking pretty worth $12/month, especially when the site lacks RSS, making it less useful on services like Feedly or Flipboard?

Speaking of that $12/month, if Vaziri, Newton and the staffers I spoke to are indeed correct, and all Chron content is headed to SFGate, will they alert readers that they don’t need to pay that $12/month any more?

Will the SFGate stop advertising that SFChronicle.com has “exclusive content,” if it doesn’t?

Of course, I asked Keith all these questions, and more, but the only thing he would say to me was “no comment.”

Then at 7:40 tonight, Keith emailed me the below statement, saying that “We will not have any comment beyond the statement.”

We are now publishing content from the San Francisco Chronicle on SFChronicle.com and SFGate. Our goal is to offer readers as many choices as possible to access our content when and how they want it. SFGate will continue to provide readers with a broad spectrum of content as well as all Chronicle reports and columns.

The SFChronicle.com site will continue to provide readers with an online version that replicates a newspaper experience and reflects the changes in the news throughout the day. We will continue to increase the unique assets that distinguish SFChronicle.com, including design features, utility and unique offerings to subscribers that differentiates it from our other content platforms.

As always, tips and additional information are welcomed with open arms. If you hear anything, please do let me know!

*Adkins has since , I mean, been named publisher of the Beaumont Enterprise, a small, Hearst-owned newspaper in Texas.