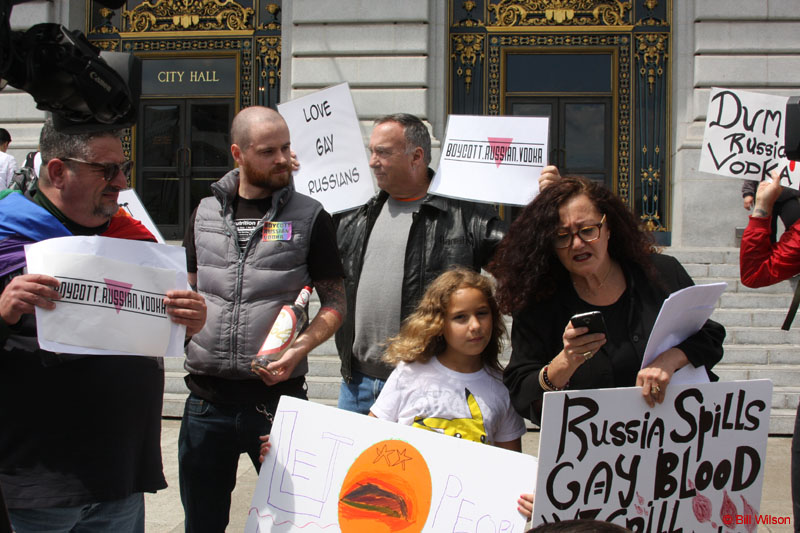 A handful of protesters in San Francisco today called for a boycott of Russian-made vodka after that country’s lawmakers recently enacted what critics are calling anti-gay legislation.

The group gathered outside City Hall this afternoon to call on Mayor Ed Lee and others to boycott Stolichnaya and other vodka brands because of the legislation, which bans “promoting non-traditional sexual relations.”

The LGBT advocacy group Human Rights Campaign has said it is concerned that any perceived pro-LGBT action—even same-sex partners showing affection in public—could lead to fines and jail time and that “the vague wording of the bill will enable more widespread discrimination against LGBT Russians.”

Melanie Nathan, a human rights attorney participating in today’s rally, said the law means that “if you wave a rainbow flag on the street in Russia, you will be arrested.”

Nathan said the Russian government “must rescind the law or we will boycott everything Russian.”

Local gay rights activist Michael Petrelis said two bars in San Francisco’s Castro District—Hi Tops and Moby Dick—have joined the boycott, and he called on the mayor and others to “take a stand against the anti-gay violence and anti-gay laws in Russia.”

Petrelis said the group is targeting Stolichnaya for the boycott because it is the most visible brand of Russian vodka.

However, Stolichnaya CEO Val Mendeleev has said that although Stolichnaya is made from Russian ingredients, the company is owned by a group headquartered in Luxembourg and one of its main production and bottling facilities is in Latvia.

Mendeleev recently issued a statement denouncing the new Russian law and expressing support for the LGBT community. He said the company is “upset and angry” about the new law and “continues to be a fervent supporter and friend to the LGBT community.”

Robbie Sweeny, a member of the local group calling for the boycott, poured water from a vodka bottle, rather than actual vodka, onto the sidewalk in front of City Hall and said the boycott is “of all Russian vodka, it’s not aimed solely at Stoli.”

The group also held a rally over the weekend at the Russian consulate in San Francisco, and Sweeny has created a website, www.boycottrussianvodka, with more information about the boycott.