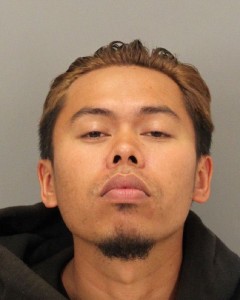 A man in the buff allegedly destroyed thousands of dollars worth of property at a Milpitas church Wednesday morning, police said.

Officers found the chapel damaged and several statues, candleholders and planters destroyed inside and outside, police said.

A volunteer at the church office said this afternoon that three statues were found broken and that the flower beds in front of the church had been trampled and ruined. In the school area she said flowerpots had been smashed.

She said repairs are under way.

After searching the area, police found Michael Vickroy, 30, (pictured right) in the church’s south parking lot without any clothes on, police said.

Vickroy, who is a transient, apparently had had an argument with his girlfriend about their relationship and proceeded to take out his anger at the church.

Vickroy was arrested without incident. He was booked at Santa Clara County Jail on suspicion of vandalizing a church.

Vandalizing a place of worship can be a felony offense and considered a hate crime, according to police.