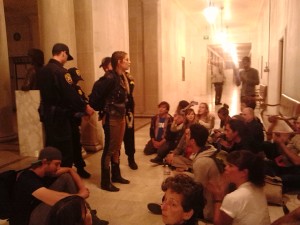 More than two-dozen City College of San Francisco students and advocates were arrested at City Hall late Tuesday night after calling on the mayor to support the embattled school in its fight to maintain accreditation.

A total of 26 people were detained and cited for trespassing and unlawful assembly outside the mayor’s office at City Hall at about 11:50 p.m. Tuesday, sheriff’s spokeswoman Susan Fahey said.

Organizer Eric Blanc said his group has tried to meet with Mayor Ed Lee for a month but has been rebuffed, so the group decided to gather outside Lee’s office for a sit-in after a large rally in support of the 85,000-student school earlier Tuesday.

The Accrediting Commission for Community and Junior Colleges announced last month that City College would lose its accreditation at the end of July 2014. The school is appealing the decision and is hoping that by working to address some of the problems cited by the commission it can maintain its accreditation.

However, the U.S. Department of Education last week issued a letter finding fault with the ACCJC’s processes for evaluating City College, citing vague instructions for compliance, a lack of faculty members on evaluation teams and other issues.

Blanc said the student group opposes Agrella, who has unilateral control to make changes to the school and is refusing to cite the Department of Education’s letter as part of City College’s appeal of the ACCJC’s decision to revoke its accreditation.

He said, “We need the mayor to throw his weight in support of City College and he’s throwing it against it right now.”

Christine Falvey, a spokeswoman for Lee, said this morning, “The mayor realizes that these are difficult times for the college and its students, but the best way we can support students is to focus on true reforms that will keep the college open and on a path to long-term success.”

Fahey, of the sheriff’s department, said a large group from the rally came into City Hall at about 5 p.m. Tuesday. They were given an order to disperse shortly before midnight, but 26 people refused.

Those protesters were cited and then released outside of City Hall early this morning, she said.

The group has posted pictures of the sit-in on its website at www.saveccsf.org.