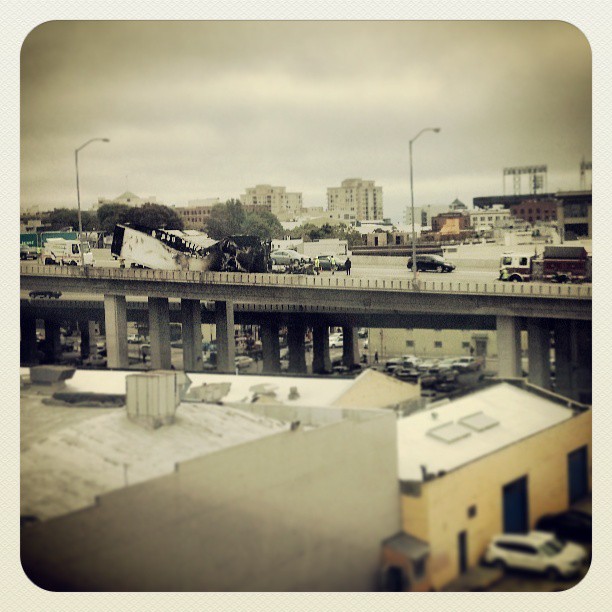 The incident began around 5:45 a.m. when the truck’s front tire blew out, according to the California Highway Patrol. The driver pulled over west of Fremont Street and then discovered that the truck was smoking.

The truck then became engulfed in flames. The blaze was extinguished at 6:53 a.m., San Francisco fire officials said. No one was injured.

All the lanes opened at 3:25 p.m. after the charred truck was towed away.

12:07 PM: There was no BART strike today, but a big-rig carrying Asian food supplies caught fire just west of the Bay Bridge early this morning, creating a traffic nightmare for commuters heading into San Francisco from the East Bay.

As of midday, three westbound lanes of I-80 were still blocked, and the California Highway Patrol was estimating that they wouldn’t reopen until about 3 p.m.

The truck was driving west across the bridge around 5:45 a.m. when a front tire blew out, CHP Officer Michael Ferguson said.

The big-rig driver was able to pull over to the right shoulder of the highway just west of Fremont Street, and when he got out, he discovered that smoke was coming from underneath the vehicle, Ferguson said.

The truck then became engulfed in flames. The blaze was extinguished more than an hour later, at 6:53 a.m., San Francisco fire officials said. No one was injured.

The two right lanes of westbound Highway 80 have been closed for hours, and a third lane was also blocked late this morning while crews removed diesel fuel from the vehicle, cleaned up the scene and worked to move the big-rig from the roadway, Ferguson said.

He said the truck was carrying Asian food supplies such as fish, sushi and rice, and that the food had absorbed much of the water used to put out the fire, making the truck heavier.

The CHP had initially hoped to have the highway cleared by noon, but Ferguson said crews now estimate the cleanup could last until 3 p.m.

He said around midday that one westbound lane remained open, but authorities are encouraging motorists to seek alternate routes.

9:08 AM: Lanes will remain closed until noon today on westbound Interstate Highway 80 just west of the Bay Bridge in San Francisco because of a big-rig fire earlier this morning, according to the California Highway Patrol.

The big-rig caught fire at about 5:45 a.m. on westbound Highway 80 near the Fifth Street exit, CHP officials said.

The blaze was extinguished more than an hour later, at 6:53 a.m., according to San Francisco fire officials. No one was injured.

The two right lanes of westbound Highway 80 will remain closed until about noon while crews clean up the roadway and tow away the charred truck, CHP Officer Kevin Bartlett said.

6:58 AM: Firefighters in San Francisco have contained a blaze that sparked in a big-rig’s engine this morning, but traffic remains snarled on westbound Interstate Highway 80.

The two right lanes of westbound Highway 80, near Fifth Street, are closed, according to the California Highway Patrol.

The driver of the big-rig was not injured, she said.

It is expected that the lanes will be closed for at least two hours, according to the CHP.