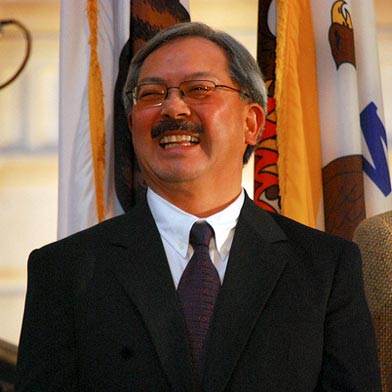 Lee “applauded” the governor’s decision to appoint a three-person board of inquiry to look into the ongoing contract talks “so that the people of the Bay Area will not endure a debilitating BART strike.”

Had Brown not stepped in late Sunday night, a strike would have begun at midnight today. The board will investigate the threatened strike.

The inquiry was called because Brown said a strike would “significantly disrupt public transportation services” and “endanger the public’s health, safety and welfare.”

The board is required to report back on the contract talks within seven days, with strikes and lockouts prohibited during the investigation.

Lee said the board “can help move this dispute toward resolution” and he urged both BART union and management leaders to reach an agreement that benefits both sides “as quickly as possible.”

Negotiators were trying to strike a deal between BART and its two biggest unions on wages, pension and health care contributions.

But Lee said that a strike wouldn’t hurt just BART and its employees, it would affect residents throughout the Bay Area.

“A strike would not only have a negative impact on our entire regional economy, but it would undoubtedly hurt working families … people who did not have a voice over the last several months during non-conclusive negotiations.”

BART officials said they officially asked the governor Sunday to call for a cooling off period to allow them to continue to negotiate.

“This would allow us to continue negotiating while assuring the public that it will have transit service tomorrow and for another 60 days as we continue to bargain,” BART Board President Tom Radulovich said in a letter to the governor.

Union officials expressed disappointment in the outcome and said BART has been bargaining in bad faith, with no real attempt to reach a compromise and no interest in addressing many concerns raised by the union. They said the inquiry could help illuminate the problem, but will necessarily take energy away from contract talks.

“We’ve been here for the last 24 hours and we only got a very regressive proposal from BART in the past 45 minutes,” said Josie Mooney, a negotiator for Service Employees International Union Local 1021.

Antonette Bryant, president of the Amalgamated Transit Union Local 1555, said talks could have been resolved by the end of June if BART had been willing to negotiate.

“If the district would come to the table and bargain with us in good faith, none of this would be necessary, the governor would not have to get involved, the public worries would not be necessary,” Bryant said.

BART officials have said they are focused on long term infrastructure repairs and improvement and reining in the costs of benefits.

“Our labor agreements must reflect those financial realities,” Radulovich’s letter to the governor said.
Lee, however, said the most important aspect to consider is the public.

“The riding public is and must remain our number one priority as all parties work to resolve this dispute.”