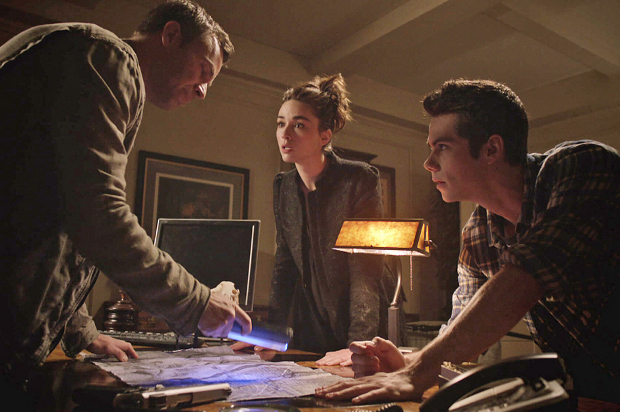 The spate of commercials for back to school sales signifies that summer vacation is coming to an end, as we careen into cardigans and pumpkin spiced everything. By jove, the fall season is starting! We made it through the rain! Or fog, rather. Soon, Appealing TV will be covering returning offerings, and freshman series. They’ll still be time for food court wars and Canadian cop shows, though. There will always be time for that.

Monday, August 19
Teen Wolf (10pm, MTV, season finale)
Many a person rolled their eyes at the announcement of a MTV-produced television series based on Teen Wolf. But, MTV’s Teen Wolf is not just One Tree Hill with werewolves (before it was about dogs eating hearts earmarked for transplant, One Tree Hill was a show about basketball). It’s Teen Wolf in the sense that there are teenagers who are also werewolves. And there are werewolf hunters, and a pretty easy-going mythos that isn’t awful. Teen Wolf in name only, but is that really a bad thing?

Tuesday, August 20
Heroes of Cosplay (10pm, SyFy)
Out of the conventions and the internet, cosplayers are coming into your home. Via basic cable television. Cosplay, shorthand for costume play, is something you may have seen before, but didn’t know the name of. You know, where you see pictures of people dressed up as their favorite characters from popular culture. Maybe if you’ve been walking around Moscone Center in SF around March’s Wondercon (as far as I’m concerned the the last Wondercon took place in 2011), you probably spotted somebody with a giant foam sword and spiked hair waiting in line at Starbucks. That’s cosplay! That’s what Heroes of Cosplay is about! Not people waiting in line for Starbucks, but people who cosplay. And cosplay well, to boot!

Their cosplay is way better than the time I walked around Fanime in San Jose in 2005 with a sign that said “I love illegal schoolgirls.” It was a different time back then. It was like an art statement or something. I was a trailblazer, man. Forcing people to, like, confront their own perceptions of what a costume was. Or maybe I was a nineteen year old snot nosed kid with a head full of Rancid lyrics who thought I was being edgy.

Wednesday, August 21
The Soup (10pm, E!)
Happy 500th episode, The Soup! The successor to Talk Soup, host Joel McHale provided acerbic commentary to balance Best Week Ever’s cheerleading (when Best Week Ever was still on the air). Although McHale rose to prominence on Community, I will always remember him as the host of The Soup. To celebrate this spectacular 500 episode feat, for the first time ever, The Soup will be going live! I’m positive there will be celebrity guests, hilarious and mean things said about other celebrities and awful things on TV. best believe they will talk about chicks, man.

Friday, August 23
King (10pm, Reelz, season finale)
Smoke ’em if you got ’em, ’cause King isn’t coming back. The Canadian (of course) import got the can after wrapping up its second season (this season) in its motherland. It’s about a cop who’s really good at her job, but has an awful personal life. It showcases the rougher side of Toronto. And sure, it’s all fun and eye-rolling to make fun of Canada for being polite and nice and whatever, but I do believe there’s a rougher side of Toronto! Watching this video when I was a teenager destroyed any notions I had of a polite and nice Canada.

Real talk, though, there has got to be enough grist for someone to be awful at their job but have their personal life be great, though.

Here’s a clip from The Clerks Animated Series making fun of Canada.

Sunday, August 25
2013 MTV Video Music Awards (9pm, MTV)
Another year of MTV carrying on the charade that music videos are still a thing they give a shit about. It is a tradition that refuses to die (this is the 30th year) because it’s been so ingrained into the collective consciousness. Much like twenty-somethings still sitting at the kid’s table during the holidays. Or someone who refuses to get over Britney Spears and Christina Aguilera performing ‘Like a Virgin’ with Madonna at the 2003 VMAs. Regardless, it will provide another avenue for people to bemoan the state of music today, and inspire a bunch of groan inducing ‘hey remember when MTV used to play music videos?’ social media posts. Here are some alternatives:

ICYMI:
– If you weren’t too busy trying to analyze the color palette of last Sunday’s episode of Breaking Bad, you may have noticed that the episode was dedicated to Kevin Cordasco. Cordasco, died in March at age 16 after a six year battle with cancer, and was a huge fan of the show. Cordasco was able to meet the cast and writers of the show, and when given the option to know the ending of Breaking Bad, just as long as he kept it to himself, Cordasco said that wanted to wait along with everybody else. His own, “I am the one who knocks” moment.