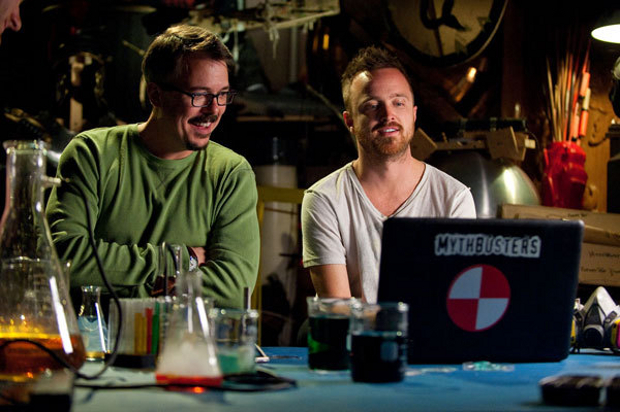 See, this is what happens when we outsource our science education to the Discovery Channel. Not even the high holy days of Shark Week are immune to tomfoolery. Quick recap: Night one of Shark Week aired the documentary, Megalodon: The Monster Shark Lives. Only problem was (besides sounding like a SyFy Thursday night movie), it was fake, which was only noted during a too-fast-to-read disclaimer at the end.

None of the institutions or agencies that appear in the film are affiliated with it in any way, nor have approved its contents. Though certain events and characters in this film have been dramatized, sightings of “Submarine” continue to this day. Megalodon was a real shark. Legends of giant sharks persist all over the world. There is still debate about what they might be.

This is what happens when we pull money out of the Seaquest program. Wil Wheaton wrote a letter expressing his disapproval, even! Not about Seaquest, about what Discovery tried to pull.

This scandal has effectively disillusioned an entire generation of kids, who will instead fill the seats of every Kirk Cameron movie released for the next fifty years. No amount of Shark After Dark can repair that. Now let us never speak about Shark Week ever again.

Monday, August 12
Mythbusters (10pm, Discovery)
Yeah! Science! Hot on the heels of the season premiere last night, creator Vince Gilligan and star Aaron Paul drop by Mythbusters in some dope cross-promotional, crossover action. And more importantly? Adam Savage in a Heisenberg cosplay. The gang will be testing out a couple of myths from season one of Breaking Bad. I am reluctant to say which ones and spoil the surprise, but if you really wanted to you could Google it yourself. If you remember how season one went down, you can probably guess which myths they’ll be trying to bust.

And yo, why hasn’t anybody from here done a guided tour of places in the Bay where the Mythbusters shoot? It’ll probably be one of the best things to happen to Encinal High School in Alameda in years. (Oh, I kid, I kid. Here’s a clip of the Mythbusters appearing at a fundraiser for Encinal. Which is awesome. Go Jets!)

I remember when Tom Hanks visited the high school I would later test out of, and my drama teacher gave me explicit instructions not to talk about Bosom Buddies. What I’m trying to say is it would be awesome if Encinal opened up the Adam Savage and Jamie Hyneman aka Heisenberg aka Walter White aka Ghostface Killa Science Wing.

Tuesday, August 13
Doomsday Preppers (9pm, National Geographic, season premiere)
Essentially, Doomsday Preppers is like watching James Franco’s “Look at my Shit” monologue from Spring Breakers. If being a survivalist means appearing on some basic cable reality show to give away most of my operational secrets, then I guess I’m not a survivalist. More of a survival enthusiast? Or maybe the people featured on Doomsday Preppers are shunned as sellouts for giving away trade secrets, akin to how Gob was blackballed from the Alliance of Magicians. I like to think there is a Doomsday Prepper Alliance.

God, I am not looking forward to the post-apocalypse, where people will be taking photos of their MREs before eating or taking selfies with their machetes (not like this doesn’t happen already). Because in my version of the apocalypse, people taking selfies or photos of food will still live on. Because the human spirit cannot be extinguished!

Wednesday, August 14
Duck Dynasty (10pm, A&E, season premiere)
This is basically a sitcom. I suppose the appeal with Duck Dynasty is getting to see people with some sweet beards, sweet camo and American flag headbands with money to throw around? I suppose it’s kind of cool to see like an American Dream that doesn’t involve monetizing Twitter followers and micro-transactions on shit-developed mobile apps. Or maybe it’s just the beards. The Storage Wars theme was right, and yes, money does in fact own this town.

Thursday, August 15
With the sun setting on its first two hits that put AMC on the map (Breaking Bad and Mad Men, which is ending in April 2014), the network cannot spend its nights playing re-runs of Tom Cruise in The Last Samurai anymore! Besides, everybody knows FX has the movies. So what do they do instead? Flood their time slots with reality shows. First up is Owners Manual (10pm, series premiere) which looks like it could have fallen off a truck en route to BBC America. Two men. One reads the manual (RTFM, as the young neckbeards might say). The other doesn’t.

Following Owners Manual is the season premiere of The Pitch (11pm, season premiere) where two ad agencies compete for the same account. Of course it’s the reality show revision of Mad Men, of course it looks slick, of course there’s drama, and of course it’s from the producers of Undercover Boss. As a counterpoint, may I present John Cusak’s buy-sell-process monologue from Say Anything. . MMA. Sport of the future.

Friday, August 16
Ghost Adventures (9pm, Travel Channel, season premiere)
The paranormal investigators/skull t-shirt enthusiasts are back with more blurry night vision footage of yelling about EKG readings. And more showing off off random back scratches (you know from like, ghosts, and stuff), although I suspect it really is just an excuse to take off their shirts. Y’know, ’cause they got that pump going, looking all swole and stuff.

Saturday, August 17
America’s Cutest Dog (8pm, Animal Planet, season finale)
In case you were wondering, Animal Planet will settle the score for America, once and for all. But we all know, there will be no final solution. Only a temporary answer.

Sunday, August 18
The Great Food Truck Race(9pm, Food Network, season premiere)
The Great Food Truck Race is The Amazing Race, with more sliders and slider related food items (read: tacos). NYC to Mill Valley transplant Tyler Florence is at the helm for another year, shepherding aspiring food truck owner/operators across the county with enough swarm to spread onto a Prather Ranch slider on an Acme roll. This year’s race kicks off in San Francisco.

Whodunit (9pm, ABC, season finale)
Whodunit is a nine hour long B-movie. And it is glorious. So, so, glorious. The murder mystery reality show by way of CSI creator Zuiker features mountain lions. Exploding golf carts. People on fire. And that’s just the first three episodes. Each episode just feels like a freewrite that went five minutes too long, but because it is a freewrite nobody is wrong.

ICYMI:
– Dashing hopes of the Doctor being a person of color or a woman for another couple of years, your Twelfth Doctor is Peter Capalidi. You might remember him from that clip from In The Loop with James Gandolfini that went around when Gandolfini died. Otherwise, if you can remember your Hulu password, watch him on The Thick of it, which was created by Armando Iannucci, creator of HBO’s Veep. (Oh, you don’t need to remember your Hulu password, just watch it now).

Shoutouts to writer Gaby Dunn for the following:

"I love how the Doctor can change everything except his race." "He's time travelled enough to know a white guy is the safest thing to be."

I am biding my time, waiting for the Doctor to be a woman of color, when the delicious intersection of people who are Doctor Who fans, misogynists, and racists start show themselves. Akin to the Donald Glover/Spiderman kerfuffle a couple of years back.

Like a lot of people on Doctor Who, Capaldi appeared on an episode of Doctor Who in 2008. And in even wilder bits, check out Capaldi’s World War Z role as the W.H.O. Doctor. But that’s just the mind making meaning, right? Right?