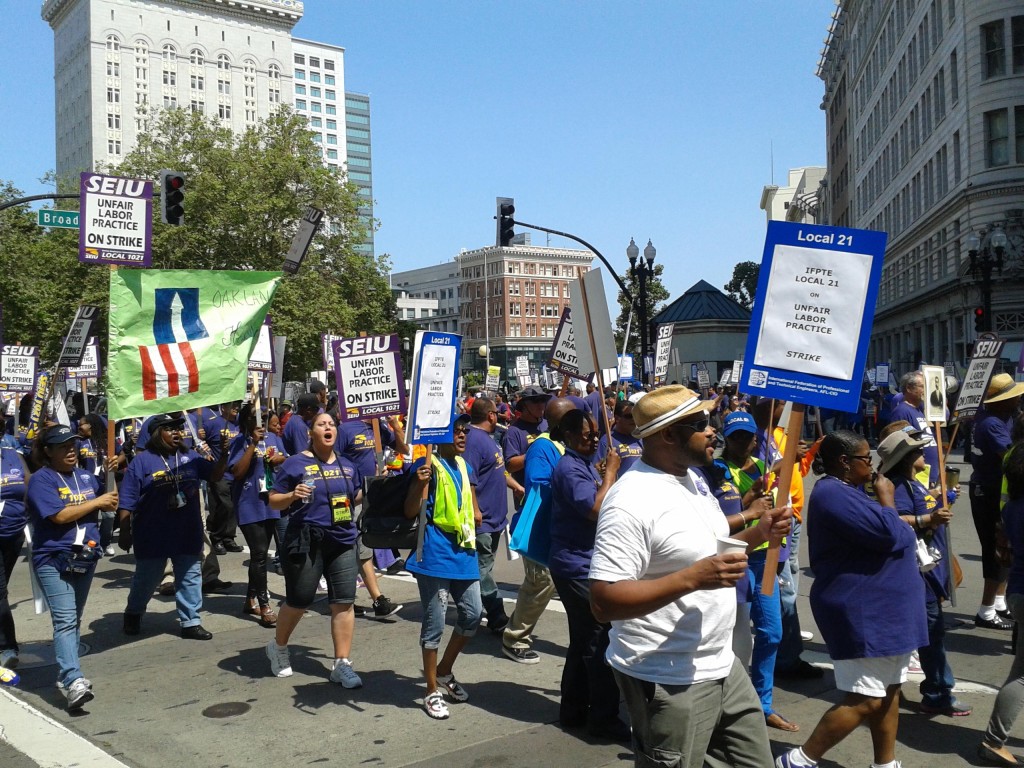 Striking city of Oakland employees are marching through downtown this morning, blocking traffic.

Hundreds of workers wearing union T-shirts and carrying picket signs were blocking the intersection of 14th Street and Broadway shortly after 11 a.m.

A large rally is planned for noon in Frank Ogawa Plaza.

Most city of Oakland services have been stopped today because of the one-day strike by unions representing 2,470 city employees.

City spokeswoman Karen Boyd said there are “growing picket lines” of employees at City Hall and other city offices downtown, and that most employees seem to be honoring the picket lines.

The work stoppage—which does not affect police and fire services—comes on the same day as a BART strike that has turned many Bay Area residents’ commutes into a nightmare.

Leaders of Service Employees International Union Local 1021 and Professional and Technical Engineers Local 21 said at a boisterous rally on Friday that employees are holding the one-day walkout because they’ve made concessions to the city during the economic downturn and they believe they deserve better compensation now that the economy is improving.

Boyd said Oakland Mayor Jean Quan met with union leaders late Friday, presented an economic package that included a cost-of-living pay increase for employees and offered to meet with them over the weekend to avert a strike, but that the unions rejected the proposal and declined to meet.

SEIU Local 1021 executive director Pete Castelli said the unions didn’t accept Quan’s offer to bargain over the weekend because they believe her offer was “not genuine” since she hasn’t participated in contract talks the past three months.

Castelli said he believes the city has only engaged in what he described as “surface and sham bargaining so far” but that he hopes the talks will become more “productive and real” when negotiations resume.

He said only “a handful” of workers crossed the unions’ picket lines this morning, and that he expects a large number of city employees to participate in a noon rally in front of City Hall.

City negotiators are scheduled to meet with IFPTE Local 21 this coming Friday and with SEIU Local 1021 on July 9, Boyd said.

Police, fire and emergency services are not affected by the one-day strike, and residents can still use online services for things like paying parking citations and requesting public records.

The Broadway Shuttle is operating, the East Oakland Sports Center fitness room is open, and major public works emergencies will be responded to, city officials said.

Among the programs and services that won’t be available are Head Start and Early Head Start, summer food service, the multi-purpose senior services program, brown bag food distribution, the sale of paratransit taxi and bus vouchers, camps and field trips.

Libraries, senior centers and public restrooms will be closed.

In addition, City Hall is closed, as are city offices at 150 and 250 Frank Ogawa Plaza. City officials are providing updates on the city’s website at www.oaklandnet.com. 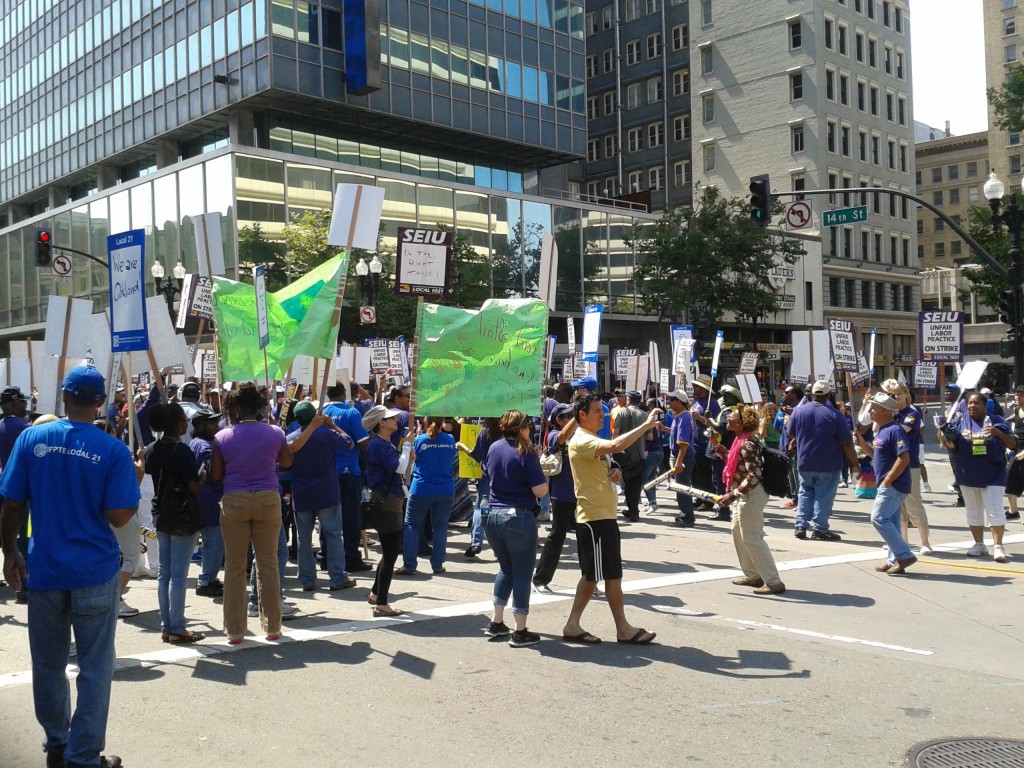