SFMTA Announces Their Pick For Polk Street Revamp Plan (Is It Yours?) 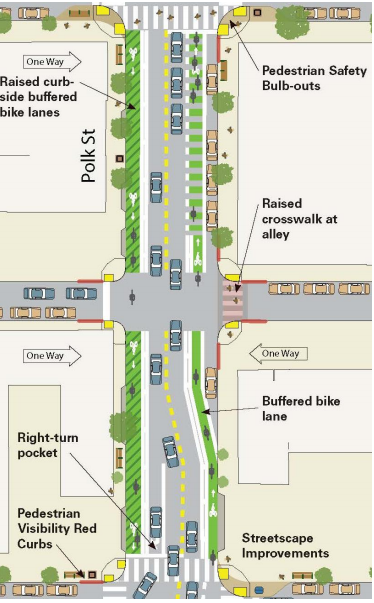 After gathering community input for the past several months on plans to revamp Polk Street, San Francisco Municipal Transportation Agency officials announced this week their preferred new design for the popular commercial corridor.

The SFMTA had proposed six new design options for Polk Street, which runs from the Civic Center area up to the northern waterfront and will be repaved in 2015.

The design preferred by the agency’s staff would include a southbound green bike lane between Union and California streets and shared lane markings in the opposite direction.

A buffered bike lane would also be installed between California and McAllister streets under the preferred design, while the agency would also adjust signal timing at intersections and add curb bulbouts to slow turning vehicles, among other safety features.

The design would cause the elimination of half of the current number of parking spots between California and McAllister streets. Many residents and business owners had opposed layout proposals that included a substantial reduction in parking spots along the street.

Polk Street has one of the highest collision rates in the city, with an average of one pedestrian and one bicyclist struck by cars along the corridor each month, SFMTA officials said.

The agency is holding an open house on July 25 to take public input on the preferred design. The meeting is scheduled from 5 to 8:30 p.m. at 1751 Sacramento St.

The SFMTA board of directors will make the final decision for the project after an environmental planning process that will take place into 2014.

More information about the preferred design can be found on the agency’s website at www.sfmta.com/polk.