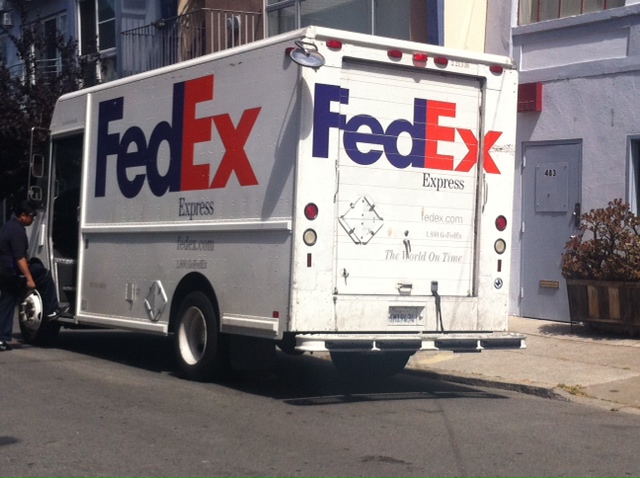 3:54 PM: San Francisco police and firefighters responded to a report of an explosion involving a FedEx truck in the city’s South of Market neighborhood this afternoon but didn’t find any damage.

There was also no one injured in the incident, which was reported at 2:01 p.m. near Sixth and Tehama streets, fire department spokeswoman Mindy Talmadge said.

When officers arrived, however, they could not find any sign that an explosion had occurred, Turner said.

A bomb squad responded and Tehama and Sixth streets were shut down, but the streets reopened about an hour later.

The FedEx truck (pictured above) appeared to be intact, and the driver declined to speak with reporters at the scene.

Turner said it is possible that someone threw a firecracker in the area of the truck.

Michael McKinney, a security guard who works on that block of Tehama Street, said there was a similar incident on Monday involving a report of an explosion with no damage.

He said he heard a loud bang that day, and wondered if someone had thrown some sort of explosive object from a window.

Talmadge said initial reports indicated that the explosion might have been caused by a package in the truck containing fireworks, but Turner said police determined that was not the case.

3:01 PM: San Francisco firefighters responded to an explosion involving a FedEx truck in the city’s South of Market neighborhood this afternoon that was apparently caused by a package containing fireworks, a fire spokeswoman said.

No one was injured in the explosion, Talmadge said.

She said the Police Department will be investigating the incident.

Police were not immediately available to provide additional details.