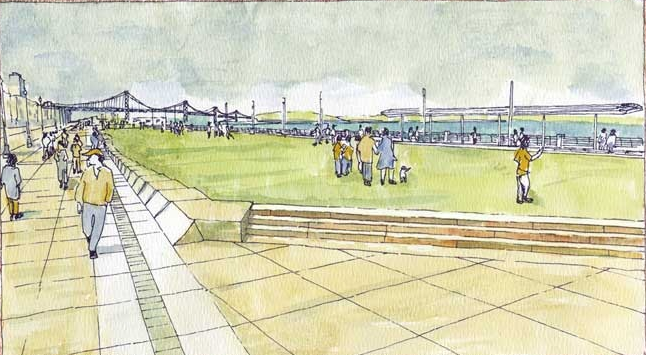 A new open space area opened along San Francisco’s waterfront this morning with a ribbon-cutting ceremony and the music of Otis Redding.

The Brannan Street Wharf, a 57,000-square-foot park south of the Bay Bridge between Piers 30-32 and 38, features a 400-foot-long lawn area, a waterside walkway and a small dock for kayaks and other small vessels.

Mayor Ed Lee said the new park “is impressive not only for its beauty in opening up more space, but because it does so in a seismically safe way and a sustainable way.”

The $26.1 million project included the demolition of dilapidated Pier 36 at the site, the rebuilding of the seawall to address potential future sea level rises and other seismic safety features below the surface of the park, Port of San Francisco executive director Monique Moyer said.

Moyer said Brannan Street Wharf will be “a jewel among the port’s park open space collection” and “a place where we can walk along and experience the Bay peacefully and playfully.”

Supervisor Jane Kim, whose district includes the park site, called it “a beautiful new addition to our waterfront.”

Otis Redding III, the son of the famous soul singer who died tragically in a plane crash in 1967, attended today’s ceremony and performed a version of his father’s song “(Sittin’ On) The Dock of the Bay” to commemorate the opening of the park.

Lyrics from the song, which was inspired by the elder Redding’s trip to the Bay Area earlier in 1967, have been engraved for viewing by visitors to the wharf, Moyer said.

The Brannan Street Wharf project was funded mainly by port funds, along with $3 million from a parks bond measure approved by San Francisco voters in 2008 and federal funding for demolition work of Pier 36 by the U.S. Army Corps of Engineers.

Sailing vessels from teams in the America’s Cup sailing regatta were in the water near the new wharf this morning, and Mayor Lee said he hopes the park will get even more use in the coming years if plans for a new arena for the Golden State Warriors is approved nearby at Piers 30-32.

“The next ribbon we cut is going to be blue and gold,” he said, a reference to the team’s colors.

The Warriors, who currently play at Oracle Arena in Oakland, hope to move to a privately funded arena across the Bay in San Francisco by 2017, but plans for the project still need approval by several government agencies.