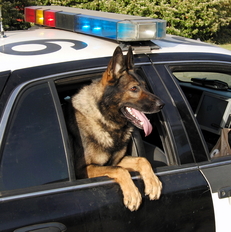 If your dog’s starting to get stinky, a wash at your local Pet Food Express this weekend will provide dual benefits – a clean dog and a full cost donation to a canine organization whose sole purpose is to keep law enforcement dogs safe.

All day this Saturday and Sunday 100 percent of dog washing proceeds at 47 Northern California Pet Food Express stores will go to the nonprofit, volunteer- run Police and Working K-9 Foundation, according to foundation co-founder Louise Tully.

According to San Francisco police Sgt. Michael Andraychak, who along with his canine named Big is one of SFO’s 11 canine teams, having an organization dedicated solely to the cause of canine safety is a rare and welcomed occurrence.

“It’s a great organization they raise funds to buy important and life-saving equipment for canines that cities can’t afford to purchase with all the budget cutting going on,” Andraychak said.

Founded five years ago, the foundation is dedicated to providing safety and emergency equipment to canines.

In its existence, Tully said the group has re-created the “custom fit” bulletproof vests for canines, with the highest degree of ballistics and comfort. The foundation has created an eight-hour emergency canine training and treatment class with its own curriculum and a hands-on veterinarian-led lesson in proper care for the canines. Since May, 405 law enforcement personnel from local police and sheriff’s and state and federal agencies have taken the class.

The group has also created a heating system that alerts an officer if the patrol car for which the canine is riding gets too hot.

“An officer has to leave the car to attend calls, but the car is like an office to a canine,” Tully said.

“The temperature inside the vehicle really matters to the health of the canine.”

She said the alarm on the dog would alert the officer by pager if the patrol car gets to a certain temperature. The system costs $1,200 per patrol car and the foundation has already outfitted numerous agencies, including San Francisco police and sheriff’s agencies, Contra Costa County sheriff’s and Novato police units. It hopes to raise money to install the system in San Mateo County canine vehicles, as well, Tully said.

Detection work and how the canine’s noses have the ability to smell is so much better than humans, which is why the canines are used for search and rescue, narcotics and explosive detection, missing people, and more, Andraychak said.

“They pick up concentrations of the odor and that’s how they follow the odor,” he said. “They can determine where it’s weaker and stronger and can work toward what they’re searching for.”

The canine teams at SFO endure extensive training exercises and play an enormous role in keeping SFO safe on a day-to-day basis, Andraychak said. So, it’s important that the canines have the proper equipment in doing so.

According to Tully, the existence of the foundation rests solely on its volunteers and the extreme generosity shown by Pet Food Express.

“We are a tiny organization – we couldn’t pull any of this off by ourselves,” Tully said. Pet Food Express has partnered with us from the beginning and they have been so supportive.”

For a list of Pet Food Express Stores, visit http://www.petfoodexpress.com/stores/. To learn more about the “Cover your K-9” event, visit www.coveryourk9.org.

The dog wash event takes place this Saturday and Sunday at all Bay Area locations.