BART Strike: Hundreds Of Frustrated Commuters Line Up For Ride Out Of SF 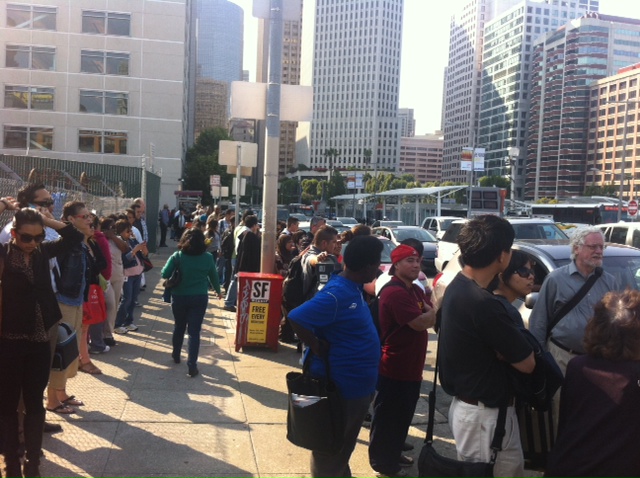 Hundreds of people lined the streets near the temporary Transbay Terminal in San Francisco this evening, trying to catch an AC Transit bus or hitch a ride in a casual carpool.

Berkeley resident Larez Davenport was in a long line on Howard Street waiting to get on a bus to the East Bay.

Davenport said she waited more than two hours at a bus stop this morning as multiple buses passed by, filled to capacity. Eventually, she got a ride to San Francisco from the husband of someone standing next to her in line.

She said she doesn’t feel much sympathy for the BART workers.

“I understand both sides, but on the other hand, there’s 400,000 people out here struggling to get home,” Davenport said. “The economy is so messed up, I’d think people would be happy just to have a job.”

Chris Duncan, an architect who works in the city, was near the front of a casual carpool line along Beale Street waiting for a ride toward the Ashby BART station.

Duncan said he got a casual carpool ride into San Francisco fairly quickly this morning, but had been waiting about half an hour for a ride home and had only seen one car come pick up people headed to his destination.

He called the strike “a failure of both sides to come to an agreement … it didn’t need to be this way.”
A block away on Spear Street, people were having even less luck finding rides to destinations farther away from the city, like Orinda and Lafayette.

Cody, who declined to give his last name, said he had not seen a single car come by in the casual carpool line for Orinda for 20 minutes and was considering calling his parents if all other options for a ride fell through.