As Hundreds Rally To Save CCSF, Mayor Lee Says “I’m not so sure that’s the best use of time” 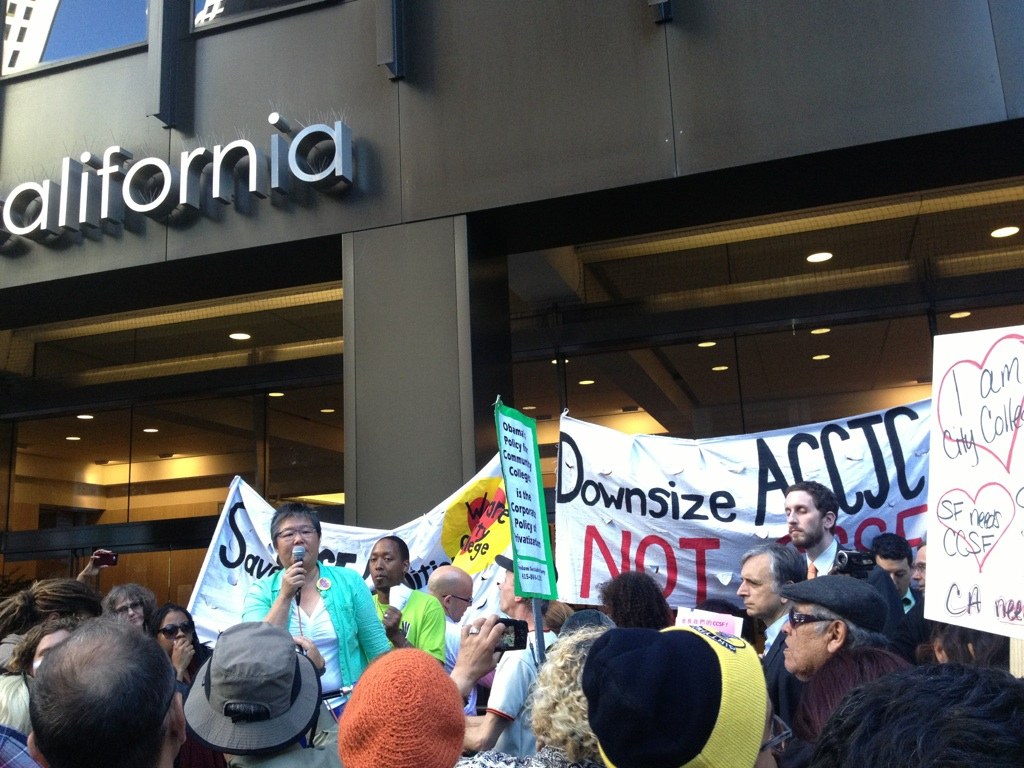 A group of about 200 City College of San Francisco students, teachers, staff and supporters held a downtown rally this afternoon in response to news that the college is facing the revocation of its accreditation.

The group, organized by the SaveCCSF Coalition, gathered at the college’s Downtown Campus at 88 Fourth St. at 4 p.m. for a march to the U.S. Department of Education’s office at 50 Beale St.

The large crowd arrived at the office shortly before 5 p.m., carrying signs with messages including “Save Our Future” and “We love CCSF.” Some protesters banged on drums and others chanted “Save City College.”
Beale Street was closed between Market and Mission streets.

The group is protesting the announcement by the Accrediting Commission for Community and Junior Colleges last Wednesday that the school’s accreditation would end on July 31, 2014.

Several college faculty members attending the rally questioned the validity of the accrediting commission’s criticism and whether it warranted possibly closing the school next year.

“My understanding is there is no area of instruction that they criticized,” ESL teacher Carolyn Cox said at the rally today, adding that she was “completely shocked about possibly losing accreditation”

In July 2012, after evaluating the school’s practices, the accrediting commission placed CCSF on “show cause” status and gave the college a list of 14 recommendations for how to preserve its accreditation.

The recommendations included improving financial and academic planning, clarifying roles of staff, faculty and administrators, and increasing the effectiveness of the college’s board of trustees.

The accrediting commission recently found that CCSF had satisfied only two of the 14 recommendations, leading to last week’s announcement that the school’s accreditation would be revoked.

But Renato Larin, a retired City College faculty member with SaveCCSF, disputed that assessment.
“All recommendations have been met and all the reporting has been done,” he said. “The accreditation committee is overstepping its boundaries.” 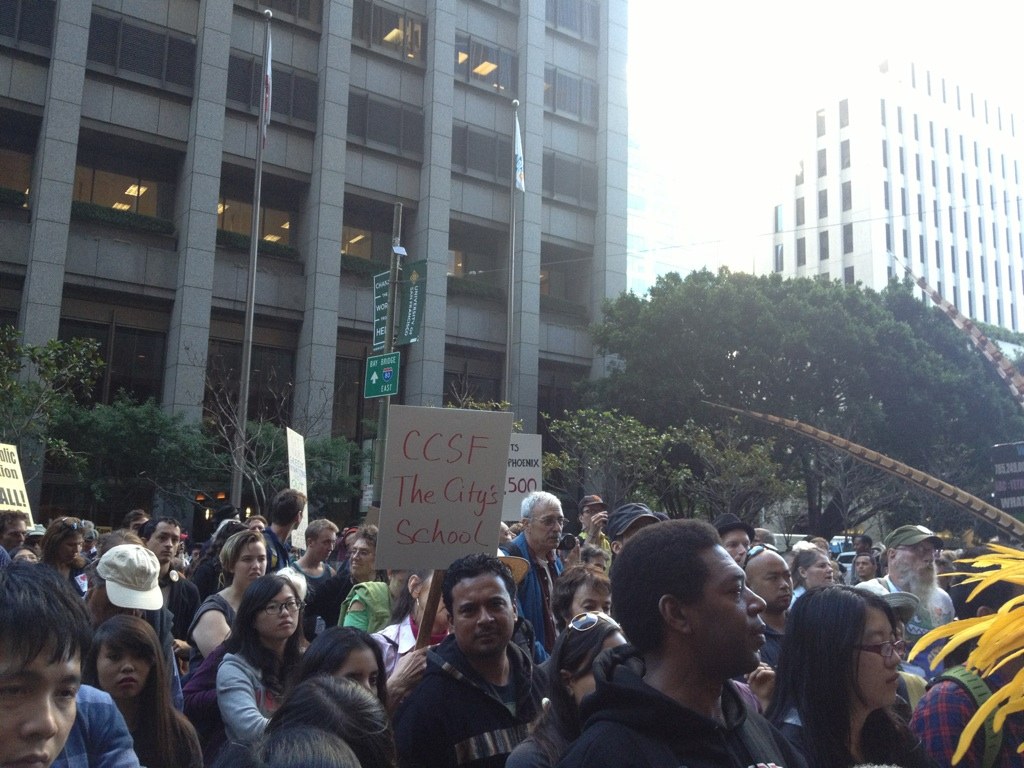 The school plans to request a review of the ACCJC’s decision, and if the decision is upheld, the school will seek an appeal.

But Cox wondered today whether the accrediting commission would be able to fairly review its own decision and decide if it was unwarranted.

“We’re going back to the same exact people who denied us accreditation,” she said. “It doesn’t sound like a logical system.”

English teacher Anna Mills worried that “We’ll lose the opportunity to serve students in the way that we have.”

“Everybody recognizes that we are flawed and we can improve,” she said. “I just think it’s devastating based on our hard work in the past year.”

Mayor Ed Lee fielded a question about City College during his monthly voter-mandated appearance at the Board of Supervisors meeting today.

Lee said he is lending the expertise of the city controller and other city staff to California Community Colleges Chancellor Brice Harris to assist the state’s efforts to revamp the school to make it financially stable.

Harris on Monday appointed Robert Agrella as the special trustee who will have unilateral power to close campuses or make other changes to City College.

The mayor told reporters after his board appearance that he does not agree with SaveCCSF’s efforts to denigrate the accrediting commission.

“These accusations about being rogue and all that stuff, I’m not so sure that’s the best use of time,” Lee said.

“We’re in a hurry,” he said. “We just cannot allow City College to close next year, that would be devastating.” 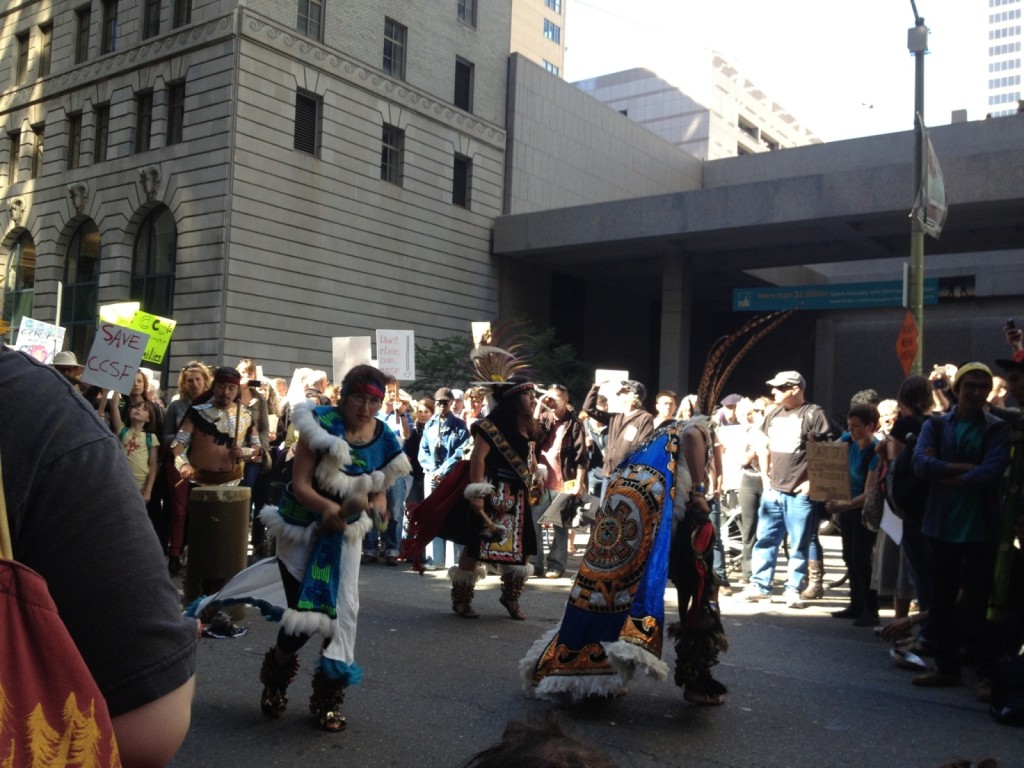