The SFMTA advises motorists of the increased congestion in San Francisco and advises commuters to use transit and avoid using the Bay Bridge on these dates.

As a reminder to fans, in order to reduce congestion on city streets after all events at AT&T Park, the SFMTA will close the northbound portion of the 4th Street (Peter R. Maloney) Bridge to all traffic except streetcars, buses, taxis and bicycles during the post-game period. Giants fans parked south of Mission Creek Channel who are heading north of the channel are encouraged to exit to the south along 3rd or 4th streets in order to avoid congestion on King and 3rd streets after AT&T Park events.

The SFMTA will provide additional bus service along the F Market & Wharves Line before and after each event: 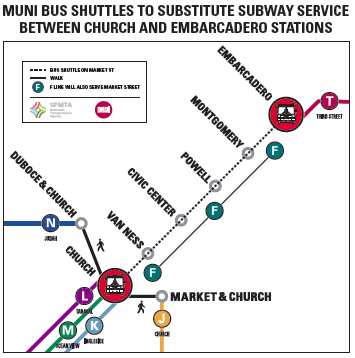 From Saturday to Thursday, beginning at 10 p.m. to the end of service each night, the SFMTA will perform construction of a fiber broadband network system to connect all underground information infrastructure in the subway and equipment rooms of the Muni Metro tunnels. This fiber network will be the internal communication backbone of the Metro system, linking all subway systems including public address, real-time platform displays and the power and facility remote monitoring systems.

During the construction, Muni Metro service will not operate between Church and Embarcadero stations in both directions. Metro bus shuttles will be provided each evening and will use the F Market & Wharves historic streetcar stops for all boardings:

· Eastbound (inbound) customers can get off at Church and Market streets or Church and Duboce, walk to the F Line stop at Market and Church streets and continue to The Embarcadero.

· Westbound (outbound) customers can board a Metro shuttle at Market and Drumm streets and transfer to their intending line at either Church Station (K Ingleside, L Taraval or M Ocean View) or the nearby surface stops (N Judah, J Church).

Komen 3-Day Walk
The Komen 3-Day Walk will start with a camp at the San Francisco Gaelic Athletic Field on Treasure Island, followed by a three-day walk beginning on Friday and the closing ceremony will take place on Sunday.

From 7 a.m. to 8 p.m., Sunday:
· Dr. Carlton B. Goodlett Place between McAllister and Grove streets
· Fulton Street between Larkin and Hyde streets

Overnight Closure for Construction
Overnight closure of northbound Highway 1 (Park Presidio Boulevard/Veterans Boulevard) at Lake Street for the Presidio Parkway construction has been taking place each night with the following hours:

This night closure will end at 5 a.m., Saturday.

During the closure, Muni routes 28 19th Avenue and 91 Owl will be affected.

The improvement work will be performed on the curb lanes on both sides of Market Street. The goal is to complete the project within 48 hours to minimize disruptions along one of San Francisco’s primary transportation corridors.

All bikes, private vehicles, taxis and trucks will be detoured from the construction zone while the work is under way. However, traffic still will be able to cross Market Street at the intersections during construction.

Pedestrians also will be able to use Market Street sidewalks and curb-ramps. Muni will continue to operate on most of Market Street, with some transit impacts.

Transit impacts:
· Starting at 7 p.m. on Friday to about 1 a.m. Sunday, all Muni buses and trolleys will travel on the center lanes on Market Street and stop at island stops instead of regular curb stops between Fremont and Fourth streets. The F-line, which already travels in the center lanes, will not be affected.

· On Saturday, from 4 a.m. to approximately 8 p.m., the 2-Clement traveling west to the Richmond District will be rerouted from Market and Front, turning right on Front, left on Pine, left on Sansome and right on Sutter back to its regular route.

· The 10-Townsend and 12-Folsom/Pacific traveling north to Chinatown will be rerouted from Second Street and Market, turning left on Market, right on Geary, right on Kearny, right on Bush and left on Sansome back to its regular route.

· The Nos. 10 and 12 will miss the stop at Sansome and Sutter streets. The alternate stops for the skipped stop are at Second and Stevenson (Market), Sansome and Pine, or other stops along Kearny Street.

· The two routes traveling south to SOMA will be rerouted from Sansome and Sutter, turning right on Sutter, left on Montgomery, left on Market, and right on Second Street back to its regular route.