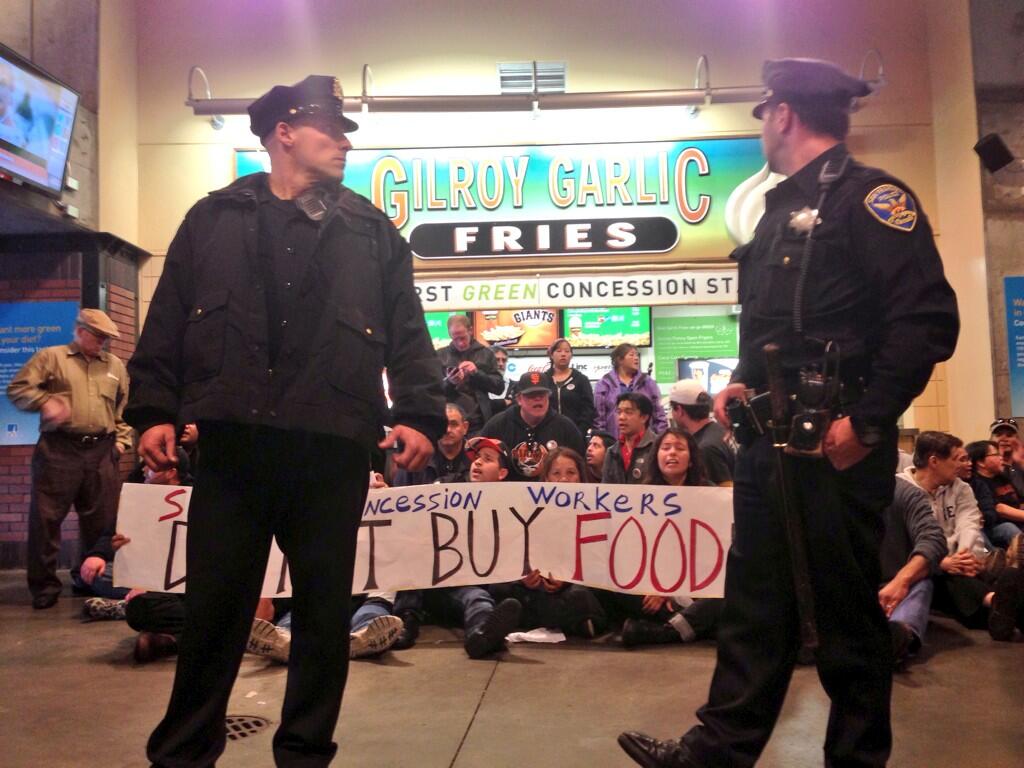 Note: The lede of the report filed at 2:04 AM incorrectly characterized the protesters as concession workers. The union has clarified that the demonstrators were supporting the employees but aren’t concession workers themselves.

Hundreds of members of Unite Here Local 2 and their supporters gathered outside the ballpark on Tuesday evening before the Giants’ game against the San Diego Padres, then dozens bought tickets to the game and came inside, police said.

The union, which represents the concession workers, is in a labor dispute with the team’s food and beverage subcontractor Centerplate for better wages, benefits and job security.

About 40 to 50 protesters staged a “sit-down” demonstration near the Gilroy Garlic Fries stand behind Section 119 during the game. When officers notified them that they were violating the ballpark’s fan code of conduct and asked them to leave, 10 refused and were arrested, police said.

The protesters were cited for trespassing and were released after being escorted out of the ballpark, according to police.

The Unite Here Local 2 concession workers, who launched a one-day strike during a game last month, were chanting to fans and encouraging them not to buy food at the concession stands, union spokeswoman Nischit Hegde said.

Hegde said the workers have not received a pay hike in three years despite two lucrative World Series wins by the Giants.

She said the union is asking for “wage increases and dignity,” including benches to sit on during work breaks.

Sam Singer, a spokesman for the subcontractor Centerplate, has said AT&T Park workers, who he said earn between $15 and $20 per hour, are the highest-paid staff in the concession business.

Giants spokeswoman Shana Daum has emphasized that the dispute is not with the team and that the organization is encouraging both sides to get back to the bargaining table to resolve their differences.

Hegde said the union and Centerplate met for negotiations last week but that the company “has pretty much dug in on their proposal.”

She said two more bargaining sessions are scheduled between the two sides next month.

2:04 AM: Ten concession workers demanding better working conditions and wages were arrested at a “sit-down” strike inside the San Francisco Giants’ AT&T Park on Tuesday evening, according to police.

At about 5:30 p.m., 300 to 400 protesters were peacefully marching outside AT&T Park’s Willie Mays Plaza, according to police.

The protesters then staged a “sit-down” strike near section 119 of the stadium, according to police.

Police explained to protest organizers that they were in violation of AT&T Park/Giants fan code of conduct, which applies to anyone who attends a Giants game at the park.

Patrons in violation of the code can be asked to leave the premises or are subject to arrest, police said.

Ten protesters participating in the “sit-down” strike refused to leave the park and were arrested.

All other protesters were escorted off of the Giants property without incident, according to police.

The ten protesters were cited for trespassing and released from custody outside AT&T Park.