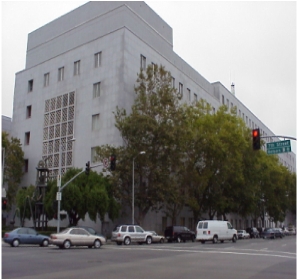 San Francisco’s top officials say the city’s Hall of Justice would be dangerously unstable in a powerful earthquake, but hundreds of city workers and jail inmates working and living there could have to wait more than a decade to move out.

Mayor Ed Lee has called the seven-story, L-shaped building at 850 Bryant St. “one of the most dangerous buildings we’re still forced to use.”

Police Chief Greg Suhr has expressed concern that the Hall of Justice, which was built in 1958 and is not up to current seismic codes, could collapse in a large temblor.

“If the earthquake happened today, we’d be out of luck,” Suhr said in April. “It would probably come down, we don’t know what the loss of life would be.”

However, various city departments are expected to remain in the building until at least 2025, while plans to replace state-owned San Francisco Superior Court courtrooms could be even further delayed due to state budget shortfalls.

Suhr made the comments about a possible collapse at a topping-out ceremony in April for a new $243 million Public Safety Building expected to open in November 2014 in the city’s Mission Bay neighborhood.

A 2010 Earthquake Safety and Emergency Response bond measure approved by San Francisco voters is allowing the Police Department to move its headquarters and Southern Station from the Hall of Justice to the new building, located at Third and Mission Rock streets.

But the Police Department will still have divisions located at the Hall of Justice. The courtrooms and the San Francisco district attorney’s, medical examiner’s and adult probation offices will still be there as well, along with two county jails that are home to more than 600 inmates on the top two floors of the building.

Charles Higueras, who is overseeing the Hall of Justice replacement project for the city’s Department of Public Works, said he doesn’t believe the building would collapse in a large earthquake but said it would likely not be suitable for re-occupancy immediately afterward.

Not having use of the Hall of Justice would cause “a dramatic impact to justice systems since it’s kind of all there,” Higueras said.

The Hall of Justice withstood the 1989 Loma Prieta earthquake, although power outages at the building hampered emergency radio communications, which have since moved to another site in the city’s Western Addition neighborhood.

The city’s 10-year capital plan recommended placing a second earthquake safety bond measure on this November’s ballot, but Higueras said the measure is being put off until June 2014.

If it makes it on the ballot and is approved by voters, the bond measure would fund the relocation of the medical examiner’s office, as well as the Police Department’s forensic and traffic divisions, in 2018.

The city also plans on purchasing lots adjacent to the Hall of Justice and building a new, several-story jail there, Higueras said. The San Francisco Police Officers Association and McDonald’s and Subway restaurants are among the current tenants on the lots.

The new jail, which is projected to cost $290 million, would likely have to be paid for out of the city’s general fund since San Francisco bond measures for jails have failed at the ballot box recently, Higueras said.

Construction on the jail project would likely not start until at least 2017, he said.

“It takes a while to develop projects,” Higueras said. “It’s kind of the nature of the beast here.”

As for the courtrooms, they are under the jurisdiction of the state Administrative Office of the Courts, which has seen budget reductions in recent years and has no current funding source for new courtrooms to replace the existing ones at the Hall of Justice, AOC spokeswoman Teresa Ruano said.

The AOC submits a yearly report to the state Department of Finance ranking the funding priorities for courthouse projects, and in the 2013 report, 38 other projects around California ranked higher than San Francisco’s.

“Even ones at a higher priority and identified to proceed have had to be put on hold by the state’s fiscal crisis,” Ruano said.

Since 2009, nearly $1.5 billion in court user fees designated for courthouse construction have been borrowed, transferred to the state’s general fund or redirected to court operations, Ruano said.

“Our planning timelines are all up in the air because the state hasn’t had funding,” she said.

The agency has estimated it would cost $206.4 million to replace the courtrooms at the Hall of Justice, the fourth-costliest project statewide.

Regardless of when the courtrooms are replaced, the west wing of the building will be cleaved and demolished once all of the city operations at the current Hall of Justice have relocated. The new courtroom building, when funding is identified, would then take its place at that same site, Higueras said.

Higueras said he is confident that San Francisco voters will pass the second earthquake safety bond measure next year to fund more of the Hall of Justice replacement projects. More than 79 percent of city voters supported the first earthquake safety bond, well above the two-thirds threshold required for approval.

“People are very much attuned to the fact that we live in earthquake country, that the big one is—sort of, kind of—around the corner,” he said. “I think people get really sensible about things in that regard.”