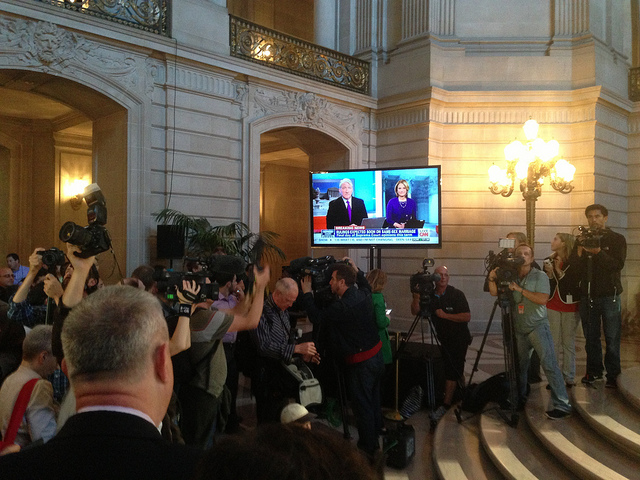 In the wake of today’s US Supreme Court decision on Proposition 8, SF City Attorney Dennis Herrera says he plans on “litigating aggressively to ensure that marriage rights for same-sex couples are fully restored throughout California.”

Wednesday morning, the US Supreme Court announced decisions that struck significant blows for marriage equality, and against Proposition 8 and the federal Defense of Marriage Act.

A roar went up in San Francisco’s City Hall when it was announced that the court ruled struck down DOMA, which denied federal benefits to same-sex couples.

The reaction was less clearcut, and slightly more confused, as the justices also decided, in a 5-4 decision, that the sponsors of Proposition 8 had no standing, or legal authority, to appeal the case after Gov. Jerry Brown and state Attorney General Kamala Harris declined to do so.

The high court said today that proponents of a voter initiative don’t have the right to defend it on appeal if state officials decline to do so.

No precedent on gay marriage in the Prop 8 case. The S. Ct. does not decide, 5-4. Roberts, Scalia, Ginsburg, Breyer, and Kagan majority.

The decision has the effect of reinstating a 2010 ruling in which U.S. District Judge Vaughn Walker said the ban violated the federal constitutional rights to equal treatment and due process.

Proposition 8, enacted by state voters in a ballot initiative in 2008, provides that only marriage between a man and a woman is valid or recognized in California.

It was challenged in 2009 in a civil rights lawsuit filed in federal court in San Francisco by two couples (ristin Perry and Sandra Stier of Berkeley and Paul Katami and Jeffrey Zarrillo of Burbank) who want to marry.

The marriage ban has remained in effect during the appeal process.

City Attorney Dennis Herrera has estimated that same-sex weddings could resume in California by late July, following a 25-day period for sponsors to ask the high court to reconsider the case, plus a few additional days for a court mandate to be issued.

But there could be further litigation about the scope of the trial court ruling striking down Proposition 8.

The sponsors of Proposition 8 have said in court filings, however, that they think Walker’s injunction would apply only to the two individual couples who challenged Proposition 8.

“I’m grateful for a decision that finally ends marriage discrimination against gay and lesbian couples, and that strikes down a law that has no place in 21st century California,” said Herrera in a statement.

“But given arguments that Prop 8’s proponents have consistently advanced, my office is prepared to litigate immediately against any effort to limit or delay the restoration of marriage equality for all Californians.”

But the majority of the crowd at City Hall wasn’t worried about those complications quite yet.

“Fuck You, Prop 8!” Kate Kendell, director of National Center for Lesbian Rights, said as the took the podium, sending live broadcast TV into a tizzy.

San Francisco Mayor Ed Lee addressed the crowd, calling today a “historic, historic day for all of us.”

“It’s been a long road … but gosh, it feels good to have love triumph over ignorance,” Lee said.

Lee and Lt. Gov. Gavin Newsom walked down the steps under the City Hall Rotunda with Phyllis Lyon, one half of the first lesbian couple to wed in San Francisco when same-sex marriage was briefly legal in 2008. Her spouse, Del Martin, died later that year.

“What a day, a special day,” said Newsom, who started it all by unexpectedly allowing same-sex weddings in the city shortly after he became mayor in 2004.

Newsom said it is the leadership of same-sex rights pioneers like Lyon and Martin that led to today’s events.

“It’s people like Phyllis and Del that stepped up and stepped in half a century ago to these debates … They didn’t wait for someone to tap them on the shoulder, they didn’t wait to ask for permission,” Newsom said.

He pointed out that the story is not yet finished.

“Like any journey it’s not linear—it’s messy, it’s complex.

There are good days and bad days, but it’s a worthy journey that we’re on,” Newsom said.

Much to my dismay, this time Newsom did not say that same sex marriage was “going to happen, whether you like it or not.”

If San Francisco’s City Hall (and my Twitter feed) is any indication, the celebration is already beginning across the city. But there are some official gatherings, too: according to Marriage Equality USA spokesman Billy Bradford, a rally and celebration, (including two stages for music and speeches) is planned at Castro and Market streets at 6:30 p.m.