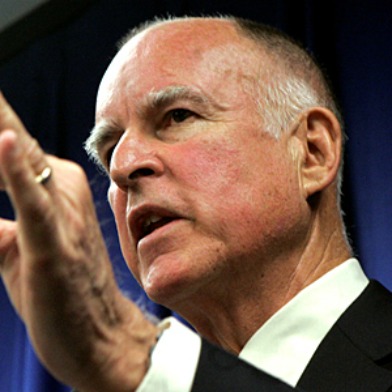 Economic inequality and climate change were the themes of a speech by Gov. Jerry Brown today at a conference in San Francisco hosted by the union National Nurses United.

“They’re both big problems,” Brown said. “It’s going to take a long period of counterforce action against the status quo.”

He said, “Capital is moving up to fewer and fewer, and it’s disrupting all of our institutions” since many people in the lower and middle classes “are seeing their purchasing power going down.”

He also said action needs to be taken immediately on climate change because “if we don’t do something, it’s going to get out of hand and we won’t be able to stop it.”

Brown encouraged the crowd of nurses, mostly clad in their union’s red shirts, to help move that agenda forward in the country’s more conservative-leaning areas.

“Can you red shirts move the red states?” he asked.

The union planned a noon rally and march across the Golden Gate Bridge today to protest the proposed Keystone XL pipeline that would carry oil from tar sands in Canada to the U.S. Gulf Coast.

National Nurses United spokesman Charles Idelson said nurses are concerned about the pipeline and the “health consequences of climate change.”

Idelson said the extraction of oil from the tar sands, its transport across the U.S. and eventual refining in the Gulf would harm people’s health in ways that nurses would have to treat.

He said the union would like to see the government invest in a green economy, which he said would create more jobs than one based on fossil fuels.

Idelson said buses were taking union members from today’s conference to the Golden Gate Bridge, where a noon rally was scheduled, followed by a 12:30 p.m. march across the bridge.