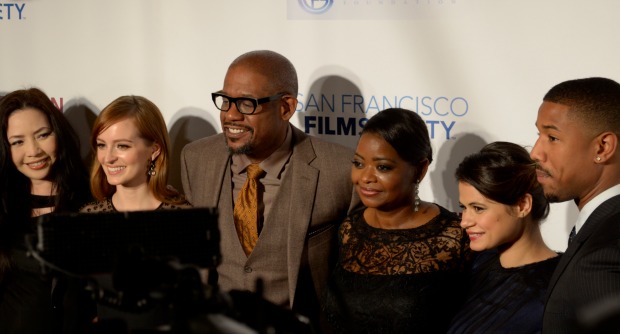 It was a packed house at Oakland’s Grand Lake Theater on Thursday night during a private screening of the film “Fruitvale Station,” a dramatization of the last 24 hours of the life of Oscar Grant III.

Grant, 22, was shot in the back on the platform of the Fruitvale BART station early on the morning of Jan. 1, 2009, by former BART police Officer Johannes Mehserle. Grant later died at Highland Hospital.

Mehserle was convicted of involuntary manslaughter in 2010 and was sentenced to two years in prison with credit for time served. He was released the following year.

During the trial, Mehserle testified that he meant to use his Taser but accidentally fired his service weapon instead.

The killing drew outrage in the Bay Area and prompted several destructive protests in Oakland.

The film, written and directed by Bay Area native Ryan Coogler, will open nationwide on July 12 after earning top honors at this year’s Sundance Film Festival.

Also at the screening were the parents of Alan Blueford, an 18-year-old Skyline High School student who was shot and killed by Oakland police Officer Miguel Masso on May 6, 2012, in a chase near 92nd Avenue and Birch Street in East Oakland.

“The Grant family reached out to us the day after our son died,” said Blueford’s mother, Jeralynn Blueford.
She said she sees the death of Grant and the death of her son, who was also black, as “very parallel.”

“Our son was yelling ‘why did you shoot me?’” after he was shot, and she said Grant’s family told her that Grant said the same thing as he lay wounded on the platform.

Inside the theater, Grant’s mother Wanda walked the red carpet with the cast members. As she spoke with reporters, she was interrupted by a kiss on the cheek from actor Michael B. Jordan, who plays her son in the film.

She said she found the screening “overwhelming” and said she is “grateful that this movie’s getting out.”
“People will see that Oscar is a human being,” she said.

Nigel Bryson, 23, a friend of Oscar Grant who was on the platform of the Fruitvale station with Grant when he was shot, called the film “terrific” but said, “Toward the end it was hard to watch.”

Coogler briefly addressed the audience before the lights darkened, saying his motivation for making “Fruitvale Station” was to show that human lives have value “regardless of what you do for your occupation.”

Many in the crowd showed up dressed to the nines, and the atmosphere was chatty and festive as people lined up for popcorn and sodas.

But when the film opened with actual footage of Grant’s shooting captured by a cellphone camera, the theater fell silent.

The movie makes clear that it won’t paint a squeaky-clean picture of Grant; right away he is shown with a large bag of marijuana, and his girlfriend is mad at him for sleeping with another woman.

Another scene is Grant’s memory of a rocky interaction with his mother, played by actress Octavia Spencer, when she visits him at San Quentin State Prison.

But it also shows him laughing and playing with his young daughter and highlights the bonds between Grant and his girlfriend and family.

Afterward, Coogler said the idea is that “Everybody’s life matters to somebody.”

Much of the movie is filmed on BART, and the trains’ ghostly hum provides an eerie soundtrack.

The film was produced by Forest Whitaker, who said he was moved by Coogler’s passion.

Spencer said she almost didn’t take the part of Wanda Grant because she felt so angry when she watched the video of Oscar Grant being shot.

“Anger was not the correct emotion to attach to a project that was this important,” she said. “I do not want to be an angry black woman on film.”

But she said that when she read the script she liked Coogler’s approach.

Coogler said he thinks that a lot of violence stems from seeing other people as different, whether the trigger is pulled by a police officer or someone involved in a turf war.

“As human beings, we have a tendency to dehumanize ‘the other,’” he said.

Coogler said his aim in “Fruitvale Station” is to “have people wonder why that is.”