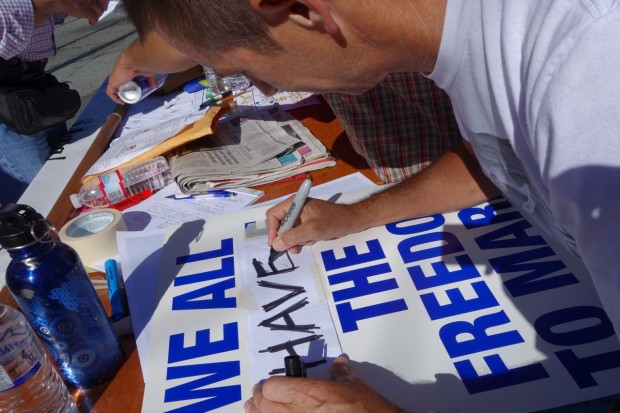 The Bay Area faith community responded to the U.S. Supreme Court rulings regarding same-sex marriage with dozen of religious leaders gathering in San Francisco this afternoon.

A coalition of about 60 clergy of myriad faiths stood on the steps of Grace Cathedral at the top of Nob Hill to celebrate the high court’s decisions on marriage equality.

The Rev. Phil Lawson from the Easter Hill United Methodist Church in Richmond praised the Supreme Court for bringing justice to California and beyond.

“Thank God they got it right today,” he said.

From Berkeley’s Beyt Tikkun synagogue, Rabbi Michael Lerner said the religious community owes the gay community an apology on behalf of the many congregations that in past years have not recognized same-sex love and civil rights.

“We are fully and 100 percent with you,” he said. “Thank God that the gay community vigorously sought the right to marry.”

The Rev. Kamal Hassan from the Sojourner Truth Presbyterian Church in Richmond lauded the decisions that will allow same-sex marriages to resume in California, but said he will remain wary.

“Celebrate this moment, but be cautious at the same time,” he said.

As a black and openly gay pastor, the Rev. Deborah Johnson from Inner Light Ministries in Santa Cruz spoke about fighting injustices for people in and beyond the LGBT community.

Mitch Mayne said he has been optimistic about when—not if—gay marriage would become legal.

As an openly gay Mormon he said he has to have a good attitude.

“We will prevail,” he said.

He noted that as a Mormon he believes discriminating against any family is wrong.

Before a closing prayer, the Rev. Amos Brown said he and the San Francisco chapter of the National Association for the Advancement of Colored People stand in solidarity with the LGBT community.

He serves as president of the NAACP San Francisco chapter.

“An injustice to one is an injury to all,” he said.

He urged attendees to not walk away today “in a state of euphoria” but to be mindful that marriage equality is still sought nationwide and that other struggles plague other minority groups.

“We must continue the conversation,” Brown said.

The Archbishop of San Francisco Salvatore Cordileone denounced the Supreme Court decisions this morning in a joint statement with Cardinal Timothy Dolan of New York, the president of the U.S. Conference of Catholic Bishops.

The pair called today a “tragic day for marriage and our nation.”

“The common good of all, especially our children, depends upon a society that strives to uphold the truth of marriage,” the statement read.

The statement continued, “Marriage is the only institution that brings together a man and woman for life, providing any child who comes from their union with secure foundation of a mother and a father.”