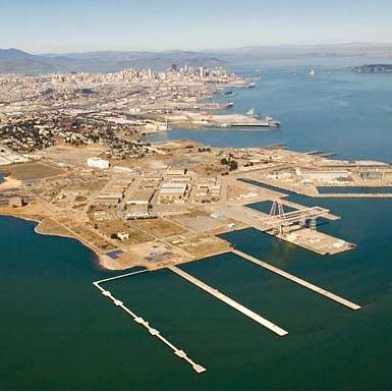 Mayor Ed Lee, former Mayor Willie Brown, Supervisor Malia Cohen and former Supervisor Sophie Maxwell were among the dignitaries on hand to celebrate the start of construction on the first phase of the nearly $8 billion project.

Developed by the company Lennar Urban, the Hunters Point project is expected to create more than 12,000 new residential units, as well as new retail space and more than 350 acres of parkland over the next 20 years, according to the mayor’s office.

“The promise is being delivered,” Lee said. “It’s no longer promises, the dirt is being turned over and buildings are getting started.”

The project has had “at times a somewhat complicated journey” in getting to the groundbreaking, said Kofi Bonner, who is overseeing the redevelopment for Lennar.

The site has undergone extensive cleanup of hazardous materials from the former naval shipyard while project organizers have also dealt with the uncertainty over whether the San Francisco 49ers were going to stay in their stadium at Candlestick Park.

With the team moving down to a new stadium in Santa Clara in 2014, the stadium will be demolished and new retail space will take its place in the second phase of the redevelopment project, Bonner said.

He said the first residential units will be completed on the site in the next three years.

Cohen, whose district includes the Bayview-Hunters Point neighborhoods in the southeast end of the city, said those neighborhoods “have had significant challenges” with crime and blight but said the new project will bring better days ahead.

“We’re moving beyond that old narrative of fear and hatred … and walking lockstep into a prosperous future,” she said.

Brown said, “There is no other piece of soil in any other urban area that’s as potentially lucrative.”
“It’s going to be an ideal place to live,” he said.

Away from the celebration, dozens of members of the job advocate group Aboriginal Blackman United protested what they said was a lack of job opportunities for neighborhood residents on the project.

ABU president James Richards said his group has not been consulted in negotiations over who will be hired for the project.

Richards said his group will continue to protest at the site in the coming days until Lennar and the city engage them and other neighborhood groups about jobs on the project.

“We’ll be back tomorrow and the next day and the next day, until we get justice on these jobs,” he said.
Bonner from Lennar said, “We know them well, they know us well … they want to make sure nobody forgets them and we appreciate that.”

More information about the Hunters Point project can be found online at www.theshipyardsf.com.