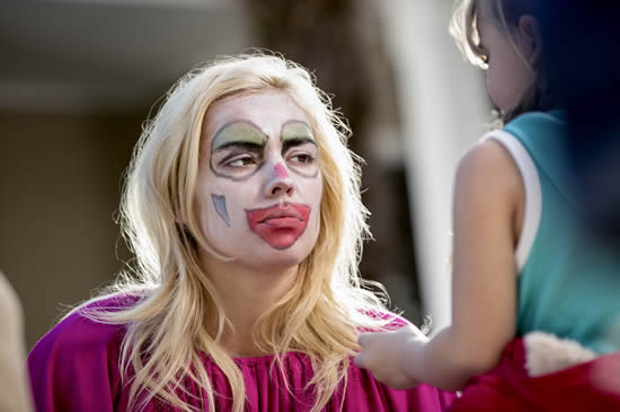 Holy convergence of racism, butter, and diabetes! By the time you will have read this, you will have probably have heard that Food Network will not be renewing Paula Deen’s contract when it expires at the end of the month. This is hot on the heels (and obviously, totally a direct result) of her admitting using the n-word during a deposition and wanting to have black waiters play the role of slaves at a dinner party she was planning.

So in the inevitable Django Unchained/Paula Deen mash-up video (made in 8-bit, naturally) I am fully expecting to hear I LIKE THE WAY YOU DIABETES.

If Paula Deen said she doesn’t see color due to complications from diabetes I would have believed her.

Monday, June 24
Under the Dome (10pm, CBS, series premiere)
From the thousand something page book of the same name by Stephen King this miniseries event is adapted by comic and television writer Brian K. Vaughn (who last worked on LOST). And Hey! Breaking Bad’s Dean Norris in it. First post (or pre-post?) Breaking Bad role sighting in the wild. But enough about that.

A large, transparent dome has encased Chester’s Mills, Maine cutting the inhabitants of the town off from the rest of the world, and leaving them to fend for themselves. Looks intriguing enough, not blue sky television, and by keeping it as a mini series (not calling it an event) CBS might have something good on their hands (which is something that doesn’t get tossed around a lot).

I think it’s a viable alternative to Cake Boss on Mondays!

Oh Sit! (8pm, CW, season finale)
Competitive musical chair competition hosted by Jamie Kennedy (aka the Grinch who stole New Year’s). That’s all you really need to know. Punny title aside, I’m personally blaming everybody who was a part of this whole kid food zeitgeist for this happening. Oh Sit! is what happens to people who can’t let go of being served grilled cheese sandwiches as part of their school lunch.

Tuesday, June 25
Betty White’s Off Their Rockers (8:30pm, NBC)
Some guy in my Political Science class said that the AARP was one of the most powerful forces in the country. Is this the AARP’s way of asserting its power? Would you say that this is part of a five year plan leading up to something more…sinister?

Catfish: The TV Show (10pm, MTV, season premiere)
Let the catfish investigations begin! Nearly six months after looking into Manti Te’o’s own Catfish experience, Nev Schulman is back to help people find out if their significant other on the other end of computer is really who they say they are.

Perception (10pm, TNT, season premiere)
Jeez, TNT and USA are the networks who party hard (party hard) when everyone else has left the dance floor.

Perception stars Eric McCormack (who I keep confusing for Duncan Sheik – perception!) as a schizophrenic neuropsychiatrist who aids Rachel Leigh Cook (and by extension the FBI, and by extension, the twelve year old version of Paolo who started going into puberty when She’s All That came out) in solving cases. This is a show about, how, like people say, y’know, how we only use, lik,e ten percent of our brain, man?

Wednesday, June 26
Big Brother (8pm, CBS, season premiere)
Return of the Chenbot! Which doesn’t quite track when trying to sing along in the style of Mark Morrison’s ‘Return of the Mack.’ Prepare for more bengin banality! And for those with 24 (until June 25, it bumps up to $27 then) bucks to spare, feel free to subscribe to the entire live feed, which you can access from any device!

Thursday, June 27
Small Town Security (10pm, AMC, season finale)
Small Town Security is a quirky This American Life segment that has come to life, become self-aware, and figured out how to replicate itself into twenty-two minute chunks. In the process it becomes a meta examination of what it means to be reality tv famous. Or maybe it’s about an elderly woman who talks about her farts. Because it’s definitely about that too.

Friday, June 28
Cult (8pm, CW)
Do you think the CW expected Cult to have a cult following? Sorry. That was awful. Just god awful. I’ll see myself out through the back.

Lifetime is basically The Asylum (the group that brought us Mega Shark Versus Giant Octopus and Mega Python vs. Gatoroid among tons of other things) of tragic things that happen to women.

Do No Harm (10pm, NBC)
One of the worst shows to come out of the 2013 – 2014 television season, this network that tried to find a way to weasel a Jekyll and Hyde with some kind of sterilized Dexter was jettisoned after only two episodes. It’s things like this that make you appreciate Hannibal that much more.

Sunday, June 30
Breaking Amish (10pm, TLC, season finale)
Amidst allegations that the first season of Breaking Amish was staged and fabricated, the producers for season two decided to dump the existing cast and to go with a new cast and relocate from New York to LA. Isn’t there supposed to be a bit of implicit understanding that what we’re seeing is fabricated to a degree? Reality isn’t supposed to be a designation, but rather a genre. Akin to how a McDonald’s hamburger is really just a simulation of what an actual hamburger is. Breaking Amish is a simulation of what it’s like to be a young Amish person living on their own, drinking, and having adorable accents.

The past few months of Amish-esqe television was the most anybody gave a shit about Amish people since Weird Al Yankovic’s Amish Paradise, and the Tim Allen/Kristie Alley eye roller “For Richer or Poorer.”

Copper (10pm, BBC America)
The second season of the pretty okay series from Barry Levinson was one of BBC America’s first forays into original programming. Set in the Five Points neighborhood during Post Civil War America, it’s just a gussised up procedural in Christmas Carol outfits. This season Donal Logue joins the cast, and I’m hoping that he plays a distant ancestor of his character from Terriers (never forget).

The pilot had potential. But the surreal-esqe LA Entourage-y underbelly stuff didn’t mesh very well with the simmering familial conflict between Shrieber and Voight, which I can only assume will be the narrative driver for the season long arc.

Speaking of which, for those without Showtime, the (edited) Ray Donovan pilot is on Youtube for your perusal. Prepare for a couple of pixelated breasts and lots of dropped sound where swears should be. Also:

Now if this show was about a guy who did voice-over narration for sport documentaries, you sir or ma’am would have yourself a winner.

ICYMI:
Be seeing you, James Gandolfini: