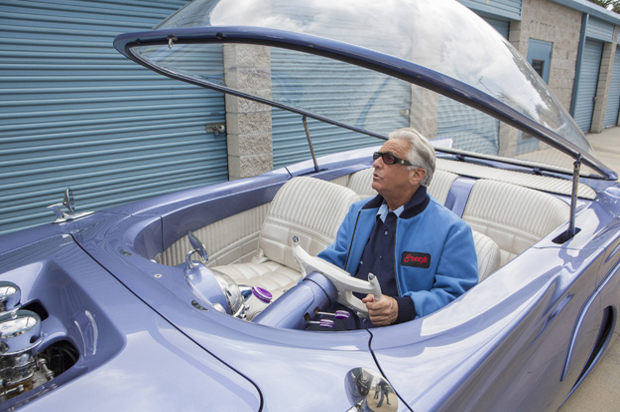 E3 was this past week. That’s the Electronic Entertainment Expo, to those who don’t give a crap about video games. Besides games, the event showcased the upcoming Xbox One and Playstation 4. Or new ways to watch TV, as the Xbox One reveal six weeks ago demonstrates. We are careering into post entertainment world where something like the 82nd entry in the Fast and Furious franchise is a really just a bunch of Vines of people taking photos of food stitched together into a two-hour movie.

Monday, June 17
Catfish: the TV show: Hooked on Catfish: The road to season 2
The producers of Catfish come from the Street Fighter: The Movie: The Game school of naming things and decided to match and outdo. The actual season does not begin until next Tuesday, but here is what I’m guessing a retrospective of past Catfish investigations.

Tuesday, June 18
Storage Wars (9:00pm, A&E)
Storage Wars airs its one hundredth episode tonight! It’s been one hundred episodes of trying to convince me that people can sell beat up luggage found in abandoned storage lockers for a delusional amount of money. This is the first season sans star Dave Hester, who was unceremoniously fired for trying to expose the falsified nature of the show. Which makes him the Edward Snowden of reality television.

More importantly, if you listen to the opening theme song to Storage Wars, “Money Owns This Town” and pretend that the song is talking about Eddie Money, it takes something that is already great and elevates it to new heights. This one goes out to you, Eddie Money, King of the of the summer concert series at the Santa Cruz Beach Boardwalk.

Tom Hanks loves the show, by the way.

Wednesday, June 19
Bellator MMA Summer Series (7pm, Spike)
Fresh off its recent, high profile signing of Quinton “Rampage” Jackson (non-MMA followers might know him as B.A. Baracus from the unfortunate A-Team reboot and videos of him humping female MMA journalists), Bellator MMA (The RC Cola to the UFC’s Coca-Cola) kicks off its summer series tonight with Bellator XCVI. Headlined by former Strikeforce Light Heavyweight Champion Muhammed “King Mo” Lawal against Seth Petruzelli. This is all leaing up to the premiere of Bellator’s version of The Ultimate Fighter with FIGHT MASTER (pronounced in a low growl) at 10pm. FIGHT MASTER’S (pronounced in a low growl) tagline is “choose your coach, change your life,” which is not dissimilar from Heroes’ mantra of “save the cheerleader, save the world.”

Franklin and Bash (9pm, TNT, season premiere)
Lawyer up, bro! This is a show about bros who are lawyers, and lawyers who are bros. With one of the bros being Zach Morris from Saved by the Bell, bro. Do you ever think that Mark-Paul Gosselaar ever tries to freeze time and break the fourth wall in real life? I would imagine that it would not bode well for the integrity of the space-time continuum. Oh! Heather Locklear joins the cast this season!

Thursday, June 20
Hannibal (10pm, NBC, season finale)
As mentioned before, Bryan Fuller’s prequel to the events that go down in Thomas Harris’s novels featuring Hannibal Lecter was renewed for a second season. Macabre and unsettling, having a good show like this begin (it premiered midway through April) and end this late into the television season is one less show about the country’s best roller coasters/burger joints or Canadian sci-fi shows I have to write about. With the network making that decision being NBC, I’m not sure if this was on done on purpose.

Wilfred (10pm FX, season premiere)
Australian import Wilfred returns for its third season. Starring Elijah Wood and Jason Gann as the titular character – either a man in a dog suit who talks to Elijah Wood or a Eiljah Wood’s character’s hallucination.

Friday, June 21
Degrassi: The Next Generation (9pm, Teen Nick, season finale)
Everybody talks about Neil deGrasse Tyson, but do you know what astrophysicist doesn’t get enough recognition? My favorite astrophysicist Mike Tyson Degrassi.

Saturday, June 22
666 Park Avenue (9pm, ABC)
Starting to notice a trend here? Midseason replacement, gets bumped from the schedule, comes back to burn off episodes on Saturday night. Saturday night isn’t where shows go to die. That’s what Friday night is for. Saturday night is like that scene in Judge Dredd when Max von Sydow’s character dons a cloak and wanders the wastelands alone. This is the one where Terry O’Quinn (LOST) plays the Devil at a high rise apartment complex in New York City. Vanessa Williams also starred, who I will always remember for Eraser.

Sunday, June 23
Whodunnit? (9pm, ABC, series premiere)
From CSI creator Anthony Zuiker comes a murder mystery reality competition! And the teaser looks like a fever dream I had once (in the best way possible). There is a man lit on fire! And it looks like contestants are murdered when they are eliminated. You could say that it’s – murder. (Am I doing this right?)

In the future, due to crippling crippling cuts to police services, homicides will be solved by reality show contestants. And the contestants are also murdered one by one for gross incompetence on the job. For some reason in my future state-sponsored murder is an everyday occurrence. Like food riots.

True Blood (9pm, HBO)
When True Blood first premiered, I was under the impression that it was gonna be a tenuous (at best) allegory to the LGBTQ/Civil Rights movement. What it really devolved into a melodramatic vampire (and, SPOILER if you have yet to watch the June 16 season six premiere, werewolf three-way) fuck fest. With goddamn fairies to boot. But it gets eyeballs, so you know who you are.

It’s got a cool opening theme song, though.

My streak of "never watching an episode of #TrueBlood" continues tonight! I'm on a roll, guys.

Veep (10pm, HBO, season finale)
The second season of the nonstop scorching insult fest from Armando Iannucci (The Thick of It, In The Loop) wraps up tonight. Julia Louis-Dreyfus shines as the Vice President of the United States.

ICYMI:
At last week’s Xbox One E3 press event Quantum Break was announced from video game developer Remedy Entertainment (Max Payne 2, Alan Wake). And I’m having a doozy of a time trying to figure it out. It’s a television show and game and both directly impact each other? And not in the two tangent sense, a la Defiance where both experiences inform the other but not completely interwined. Each person would have a unique experience because of quantum mechanics and multiple timelines? My head hurts. Luckily, Kotaku explains it all.

Steven Spielberg and George Lucas recently spoke at USC and spoke about an inevitable implosion of the film industry, and how television is where it’s at right now. In fact, Lincoln was almost going to be made for HBO. This sounds like how everybody is leaving San Francisco and all of a sudden deciding that Oakland is great.

And remember:
Countdown to final episodes of Breaking Bad: 54 days