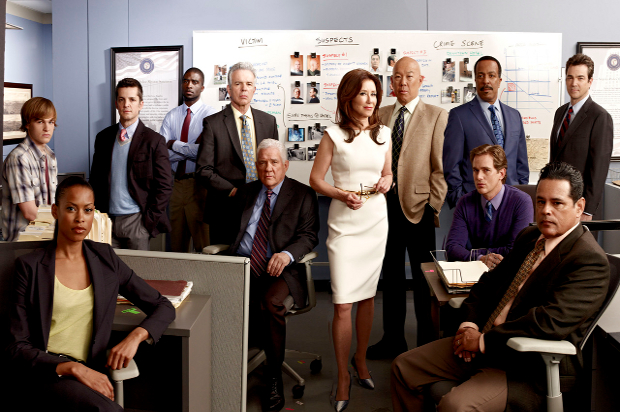 On the heels of the Breaking Bad finale penned by creator Vince Gilligan that made him cry, the first one sheet and teaser trailer announcing the final eight episodes of Breaking Bad have been released. And if you’ve been making your way down to the bottom of my weekly television dispatches, I’ve been keeping a running tab counting down the days until Breaking Bad becomes Broke Bad.

Monday, June 10
Major Crimes (9pm, TNT, season premiere)
The Closer spin-off, headed up by President Laura Roslin of the Twelve Colonies (otherwise known as Mary McDonnell) premieres its second season. Let me know when there is a show about a labia majora that solves major crimes.

Tuesday, June 11
Chopped (10pm, Food Network, season premiere)
I remember thinking that Chopped was just a cheap way for Food Network to replicate the drama of a Top Chef finale with a bunch of chef-looking types from Central Casting. With three years down and 185 episodes (!) in the can, it is probably the best show Food Network has to offer that doesn’t have Guy Fieri or total overt celebrity reality show starfucking with only the most tangental connection to food. Also, Ted Allen seems like a swell guy to spend time with.

Wednesday, June 12
Royal Pains (9pm, USA, season premiere)
The Uproxx guide to every USA show ever will be one of the most useful things you read all summer, and a great primer for when you pitch your show to USA. And it is because of this article I learned that the star of Royal Pains, Mark Feuerstein, raps recaps to previous seasons. Which is more than alright with me.

Only in America with Larry the Cable Guy (9pm, History Channel)
Included on the sheer fact that this episode is entitled “Does Larry Eat Poop?” Remember when History channel was aired nothing but World War II documentaries? Those were the days. The greatest days for a greatest generation? Maybe.

Thursday, June 13
Intervention (9pm, A&E)
Intervention is gone, over with. A&E canceled the show in May, and will be airing the final episodes starting tonight. It’s like I’m walking on sunshine! (It’s time to feel good!)

NTSF:SD:SUV:: (midnight, Cartoon Network)
Pitch perfect spoof of 24-CSI-NCIS-Criminal Minds-action-cum-police procedural out there created by/starring Paul Scheer (Human Giant, The League, the podcast How Did This Get Made?). While season three of NTSF: SD SUV (That’s National Terrorism Strike Force: San Diego: Sport Utility Vehicle, to you plebe) doesn’t premiere until July, please to enjoy this special to hold you over. And did you know that Karen Gillian, former Doctor Who companion Amy Pond is joining the cast?

Friday, June 14
Magic City (9pm, Starz, season premiere)
Despite its title, Magic City does not follow the day-to-day challenges after an alliance of magicians who, demanding to be taken seriously, start their own sovereign land where they are, in fact, taken seriously. Instead it’s about a hotel owner (Jeffrey Dean Morgan) in 1959 Miami shortly after the Cuban Revolution trying to keep his head above water while dealing with the mob. Season two begins tonight.

Saturday, June 15
Zero Hour (8pm, ABC)
No, for Christ’s sake, I’m not stylizing the with ‘o’ in Zero Hour with a 0. A midseason premiere, the ‘hey, there’s some secret hidden mythology stuff about the world, and we’re gonna need to uncover the conspiracy behind it all it in order to save humanity and I once read the back cover of a Dan Brown book at Barnes and Noble when I was stopping in to use the bathroom’ show starring Anthony Edwards was pulled from the schedule after three episodes. Much like Christ, Zero Hour rises from the dead, in this case to burn off the remaining episodes in a two episode a night fashion on the Badlands of Saturday night.

The Venture Bros. (midnight, Cartoon Network)
Season five of The Venture Bros. kicked off last week after damn near two years off the air. The Johnny Quest spoof is a vessel for the exploration of failure and to stuff as many pop culture references into its Awesome Blossom of an action-comedy animated series as possible. I am so glad you’re back, Venture Bros.

Se you next Monday!

And remember:
Countdown to final episodes of Breaking Bad: 61 days