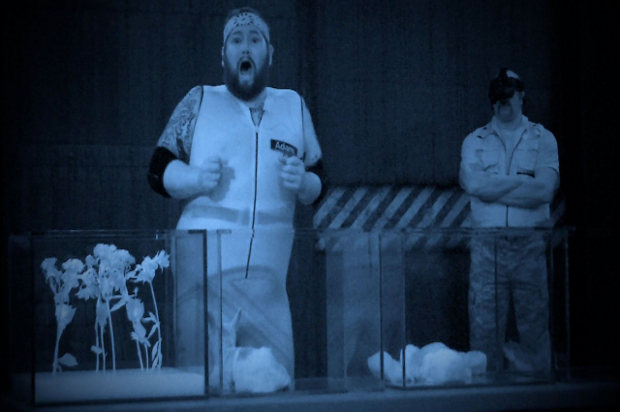 Summer season is upon us, the “put me in coach” of the television year. These shows are the the rag-tag bunch of misfits on the bench, rejected everywhere else, pushed aside, hoping to make an impression. Hopefully to impress their dismissive father in the stands who didn’t believe in them during the regular television season.

But hey! Hannibal gets renewed for a second season and Dan Harmon is officially back on Community. Because maybe NBC finally learned that it cannot program an entire week’s worth of of Sean Saves the World and call it a fall 2013 line-up.

Monday, June 3
Mistresses (10:00pm, ABC, series premiere)
Another remake from across the Atlantic. It’s like The Client List, but replace the rose-tinted, kid glove view of sex work with extramarital affairs, multiply women by four (Alyssa Milano, Rochelle Aytes, Yunjin Kim, Jes Macallan) and you have me going through puberty again four times over.

Revolution (10:00pm, NBC, season finale)
Revolution trudges through its first season finale after a late midseason return. A show about “what happened to the power” turned into “why is Gus Fring on a horse?”

Tuesday, June 4
America’s Got Talent (9pm, NBC, season premiere)
I never could take America’s Got Talent seriously, because from the years 2007 – 2011 two out of the three judges on the panel were English. People from England telling us who has talent? A bunch of white people died in the name of freedom from English people telling us who in the colonies has talent for this? Who do Piers Morgan and Sharon Osborne think they are? And, frankly, the only opinion I trust in these matters of American talent is Mr. Marah Carey himself, President Nick Cannon. This season Melanine Brown (you might know her as Scary Spice from the Spice Girls) and Heidi Klum joins Howard Stern and Howie Mandel at the judging panel.

Total Blackout (9pm, SyFy, summer season premiere)
Are people over the fact that Steve Urkel hosts the show yet? Because what you have is a bunch of Maury washouts flailing around in a TOTAL BLACKOUT for cash money prizes. If you’re still hung up about Steve Urkel, just pretend it’s his alter ego, Stefan Urquelle.

Wednesday, June 5
Through the Wormhole with Morgan Freeman (10pm, Science Channel, season premiere)
So you still want Morgan Freeman to narrate the documentary of your life? That’s cute. Amateur. I want Liev Schreiber to narrate mine. Have you heard his work on HBO’s 24/7? I am convinced he must have a post-rock quartet that plays epic six minute instrumental songs follow him arounds wherever he goes.

Otherwise, this is seriously a great show about rad things like faster than light travel and black holes. Maybe through science Morgan Freeman can prove that he’s not really having sex with his twenty-something step-granddaughter, and she’s really having sex with him via temporal distortion where she’s 70 and he’s the twenty something. Time travel, man.

Thursday, June 6
The Hero(8:00pm, TNT, series premiere)
I don’t know what The Rock and a bunch of Tough Enough rejects rappelling off building can teach me about heroism by way of a competitive reality series. Because everyone knows that a real hero is someone who works two jobs so they can send their kids to private school. Or someone who tells shitty teenagers to stop playing their shitty rap music out of their shitty cell phones on public transit. Or if you’re Dwight Schrute: “A hero kills people, people that wish him harm. A hero is part human and part supernatural. A hero is born out of a childhood trauma, or out of a disaster, and must be avenged.” Duh.

Burn Notice (9:00pm, USA, season premiere)
The crown jewel of the USA line-up begins its season of threadbare plot lines, cases of the week, spy narration, and a paycheck for Bruce Campbell to go home with. And for that, Burn Notice, I salute you.

In the Flesh (10:00pm, BBC America, miniseries premiere)
Sure, BBC America isn’t a channel that reruns episodes of Upstairs Downstairs and Cash in the Attic, but even better, BBC America is establishing itself as a place to watch good science fiction (which is way more than what I can say for SyFy). In the Flesh, a three night miniseries, features reformed and rehabilitated zombies re-integrating amongst society and experiencing zombie racism.

Graceland (10:00pm, USA, series premiere)
Based on true events! Undercover agents from different branches of law enforcement living under one roof. Insert eye-rolling Real World reference here. Starring Aaron Tveit (Les Miserables, getting on dat basic cable money) and Daniel Sunjata (Rescue Me). If Burn Notice represents the present of USA, Silk Stockings its past, does Graceland represent where USA wants to go? A little gray into its blue sky television paradise? At worst, Graceland is what happens when children wear tiny suits and try to look adult.

Da Vinci’s Demons, featuring a young and sexy Leonardo Da Vinci, looks like it appeals to the kinds of kids who cite Assassin’s Creed when writing history reports. We all know that we’re better off watching Clone High (rest in cloned peace).

Saturday, June 8
Primeval: The New World (10:00pm, SyFy, series premiere)
Spin-off/reboot/continuation/Canadian adaptation of BBC’s Primeval, only taking place in Vancouver. But dinosaurs and other assorted anachronistic animals still pop out of temporal anomalies. This single season aired elsewhere and was not renewed for a second season.

Game of Thrones (9:00pm, HBO, 70-minute season finale)
You know what they say when you play the Game of Thongs: you win or you end up on Sisqo’s new album. I have been waiting two years to deploy that line.

Falling Skies (9:00pm, TNT, season premiere)
Post apocalyptic alien invasion sci-fi show starring Noah Wyle (E.R.) comes back for a third season. The first two seasons have been uneven at best, which is a shame, I really would like this show to work. But in spite of it, I still managed to like it. THe show improved drastically by largely ditching the familial schmaltz that seems to be imbued with any Steven Spielberg associated joint (he Executive Produces it), and focusing on more of the gritty, para-military guerrilla resistance force, which works! Except when it doesn’t.

ICYMI:
– Do you ever wonder who was the genius who dreamt up shows like World’s Wildest Police Chases or Joe Millionaire? Wonder no longer! This Grantland piece by Ken Tucker details the departure of Mike Darnell, the now former head of “alternative entertainment” at FOX. Which for all intents and purposes sounds like a cross between Santa’s Workshop and Black-Ops. Or maybe he was the Philip Broyles of FOX’s own Fringe Division (of programming).

– Zosia Mamet (otherwise known as Soshanna from Girls, and also David Mamet’s daughter) is attempting to fund a music video for her and her sister’s folk duo, The Cabin Sisters on Kickstarter. Which, at the time of writing, had only garnered $2,421 of its $32,000 goal, with only six days left in its funding campaign. And maybe it’s Zach Braff’s fault, ruining Kickstarter for celebrities everywhere (lest we forget Kid and Play had a a failed Kickstarter campaign last year). But Kickstarter celebrity backlash or not, Jesus Christ, “unique brand of folk via body percussion, banjo and harmonies” just sounds like someone playing spoons outside of a Church’s Chicken trying to get a two piece meal. But hey, what’s Hype Williams up to?

And remember:
Countdown to final episodes of Breaking Bad: 68 days