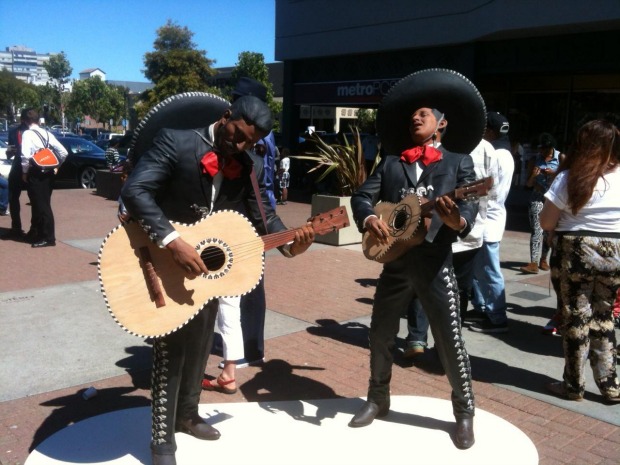 An exhibit of a dozen life-size bronze sculptures received a warm welcome at a community reception in San Francisco’s Fillmore District Thursday afternoon.

The 12 pieces forming the installation “Stop and Enjoy the Fillmore” by octogenarian sculptor Seward Johnson have been placed along Fillmore Street between Eddy Street and Geary Boulevard and in front of various buildings and at Gene Sutton Plaza in the heart of the neighborhood.

Many school children interacted with four of the sculptures at the plaza, including one of a realistic-looking hot dog vendor titled, “Relish, Too?” and “Coming Home,” depicting a military dad embracing his daughter.

The most popular statue at the plaza was a pair of mariachi men (pictured above) with life-size guitars with real strings that were being plucked and played by viewers.

The hot dog sculpture is making its premiere in San Francisco, while the other pieces have been part of a tour in 12 other American cities.

The installment will stay in the neighborhood for the next six months, project officials said.

The series is a collaborative effort between the city’s Office of Economic and Workforce Development, the Sculpture Foundation and the office of Supervisor London Breed.

Amy Cohen, director of Neighborhood Business Development for San Francisco, said the project gives tourists, visitors and others another reason to come to the Fillmore and walk around.

Funding for the project came, in part, from city funding set aside for neighborhood improvement, and organizers were able to get the $60,000 worth of sculptures for about $15,000 on a half-year loan.

Melanie Green, one of the project’s leaders, said she thinks the art will be a boon to the neighborhood.

She said she hopes tour buses that go through the neighborhood to show the area’s jazz history will now have a reason to stop and let visitors explore.

The Rev. Arnold Townsend from the Without Walls Church said the Fillmore community is excited to have the interactive art spring up on their streets.

“We always never end up with these type of exhibits in our community,” the pastor said. “We get forgotten by the city.”

He said he believes the installment is already a success because “it’s sparked debate and commentary.”
“Let them inspire you today,” he said.

The afternoon gathering included a children’s group singing African songs, arts and crafts and actual hot dogs to eat, making for some confusion next to the simulacrum.

An information center at 1309 Fillmore St. has been set up for visitors to see how the bronze sculptures are made.