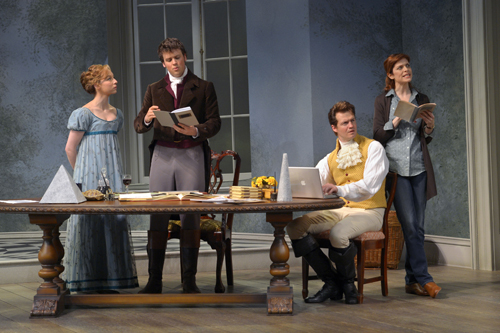 What a year for Bay Area Tom Stoppard fans. Shotgun Players in Berkeley treated us to a staggeringly good production of Shipwreck, the second installment of Stoppard’s Coast of Utopia trilogy about early socialist revolutionaries, and now we get a top notch Arcadia – what is often considered to be Stoppard’s masterwork – at ACT.

Be forewarned, though: If Arcadia is Stoppard’s masterwork, it has also got to be the most Stoppardian of Stoppard’s plays. So if you find the erudite British playwright to be a proud europhile who suffocates his characters with his preternatural cleverness, then you’re in for a rough three hours: Arcadia follows not one but two generations of aristocratic intellectuals (two centuries removed), sparring about Romanticism in an English country manor.

On the other hand, if you’re of the type that loves Stoppard for his singular wit, boundless optimism and for respecting his audience enough never to dumb down his own intellect, then you’re going to have a ball.

The play begins in the drawing room of the Sidley Park estate – where the entire play will take place – in 1809, as Thomasina Coverly (Rebekah Brockman), the precocious young lady of the house, and her tutor, Septimus Hodge (Jack Cutmore-Scott), hop between discussion of Newtonian physics and human sexuality. They are intereupted by Ezra Chater (Nicholas Pelczar), a guest poet who, unwittingly apropos, bursts in with accusations that Septimus has cuckolded him (which he has). Septimus artfully diffuses the situation, and next to arrive is Lady Croom (Julia Coffey), the lady of the house, along with Richard Noakes (Anthony Fusco), a landscape architect with intentions to redo Sidley Park’s grounds in a “picturesque” style complete with faux gothic ruins and a hermitage.

From there, Arcadia leaps forward to the present, taking up with Sidley Park’s heir, Valentine Coverly (Adam O’Byrne), a scholar in mathematics exploring chaos theory – which Thomasina’s line of inquiry prefigured – and his fiancée Hannah Jarvis (Gretchen Egolf), also an academic author currently studying Romantic landscape architecture, in particular the curious case of the Sidley Park hermit. Yet a third professorial egghead, Bernard Nightingale (Andy Murray), shows up looking to prove a scandalous hypothesis that poet Lord George Gordon Byron was at Sidley Park the very weekend depicted at the play’s start – apparently a raucous few days that, Bernard believes, culminated with Byron killing Ezra Chater in a duel and having to flee the country, occasioning the Mediterranean tour during which he would write his major work, Childe Harold’s Pilgrimage.

The first act jumps between these timeframes, giving glimpses of the fateful weekend in 1809 as it unfolds (Byron never appears in the flesh, although he is by all counts a central character), while an intellectual battle escalates between the present day characters as overconfident Bernard tries to put the pieces together himself.

If dovetailing discussions of iterative algorithms, nineteenth century landscape architecture and the details of Lord Byron’s biography sound trivial at this point, then Stoppard has succeeded. Having thus set the stage, in the second Act he will make a show of reaping great drama from this seemingly academic subject matter.

Nevertheless, it is easy to despair during intermission. Act I is heady, seemingly tedious and, for all the fooling around and flirtation happening in both eras, fairly dry. Stoppard’s quick-witted dialog leaves the actors nary a moment to breathe, with the consequence being that enunciation often trumps acting. Under the direction of Carey Perloff, the characters feel as though plugged into an elaborate, dramatic Rube Goldberg device that abides no suspense in its unfolding.

Stick through it. With the ridiculously complex plot finally set, character relations and intellectual revelations are finally able to take the fore in the triumphant second Act. Characters on both sides of the temporal divide slide into the compelling rhythms of old (though hardly platonic) friends. The cast is uniformly excellent, with Brockman and Murray doing particularly good jobs playing the brilliant ingenue and foolish biographer, respectively (both recurring Stoppard tropes). As the heat of sexual passion and intellectual inquiry (the two inseparsble sides of the Stoppard coin) builds, the time zones begin to overlap on stage, climaxing with Thomasina and Septimus waltzing, as the muted thump of electronic dance music and crackle of fireworks permeate from the modern contingent’s annual house party. This spectacular blending effect finally brings Douglas W. Schmidt’s otherwise unchanging set to life.

Arcadia is a play you walk out of, buoyed and ecstatically bewildered. The fine details of the playwright’s intellectual twists and turns are bound to escape even the most attentive viewer’s understanding, but the big strokes are impossible to miss. In contrast with the wry nihilism of Stoppard’s early plays (Rosencrantz and Gildenstern are Dead, for instance), his later works, Arcadia above all, find the playwright exuberantly toiling to communicate what it is that makes life meaningful. To see how existential purpose may exist at the nexus of landscape architecture, a poet’s wild weekend and post-Newtonian mathematics, one need only observe Stoppard’s abundantly articulate characters, behaving, to borrow Thomasina’s perfectly wielded jphrase, like bodies in heat.

Arcadia runs through June 9 at A.C.T.