Smokin’ Fast: Not Actually a Review of the Asics Hyper LD 4 Track Shoe 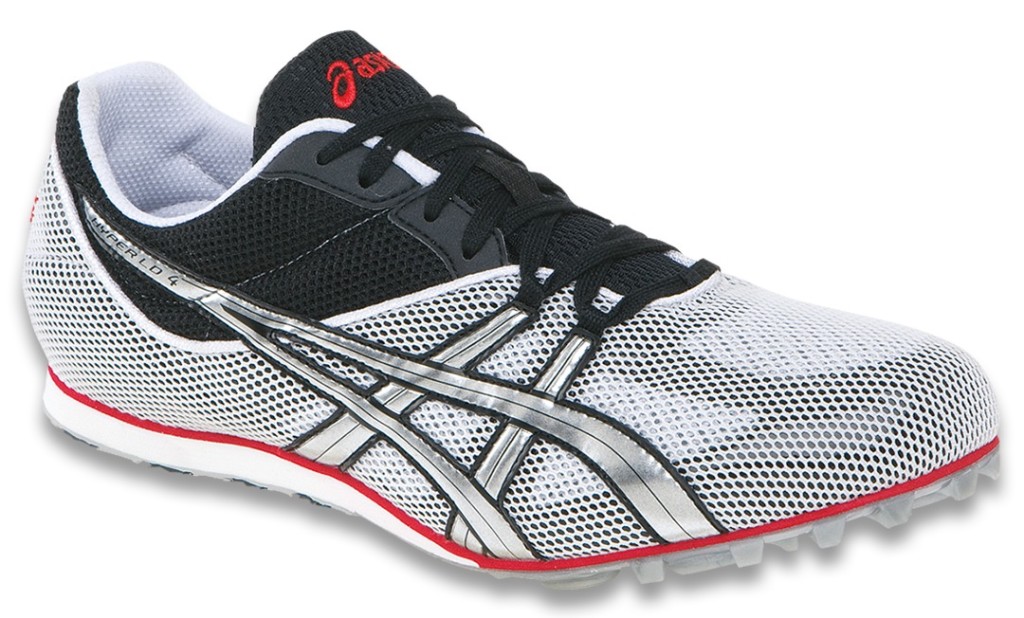 There’s always one way to muster motivation, and that’s to buy it–between coaching, classes, facilities, travel or equipment, with enough capital you can probably generate enough external motivation to overcome any intrinsic deficit, but it gets unsustainably expensive very quickly, as the marginal advantage diminishes while the price goes up logarithmically. I do not want to accidentally endorse materialist consumerism in my fitness column!

But let’s face it, even for a relatively inexpensive sport like running, eventually everyone needs a new pair of shoes. My yearning for some sexy spikes amidst spring track season sales at Sports Basement included some research online and some moments of sincere meditation before it finally became unbearable, and I bought myself a pair of Asics Hyper LD 4s, mostly based on the colorway.

On the one hand, I did kind of just want to go shopping rather than wait for the 33-Stanyan, but I also figured on doing the same speedwork at Kezar Stadium as the previous week and wanted to try an A/B test. I was wearing my second pair of trusty Merrell Trail Gloves, my first pair of which had been constant companions over two years and twelve miles of all terrain, conditions and events. So I rationalized the purchase as an experiment to see if the $45 indulgence in technolust would be worth it to maximize a variable I track as baseline — my 10k pace. Could I just walk out of the store five percent faster, maybe?

All of that fell away at the check out counter, along with concerns like, “Can I actually afford these right now?” and “But cleats aren’t allowed at Kezar!” About the latter, yes, I cheated. However, that track has seen 22 years of wear already and has needed repair or replacement for some time. So please save the energy you might have expended trolling me in the comments and sign the petition to Mayor Ed Lee from the San Francisco Track and Field Club to restore the track first. And track spikes are, most definitely, a special occasion shoe, and designed with very specific purposes in mind down to the interchangeable cleats. Like my time trial bike for triathlons, they will be sitting quietly for weeks and months waiting for a handful of training sessions and maybe a race or two, and will probably last me for years. I promise to take them to San Francisco State or Tamalpais High School next time to spread the wear around.

Could I just walk out of the store five percent faster, maybe?

The LD 4s are designed for “long” distance track events, from the 1600m up to 10k. Shoes are also designed for middle and sprint distances, with the taper, or angle, getting more aggressive and the foot plate stiffer as the speed increases. The 5mm steel pyramid spikes that came in box are a relatively benign, low-wear option — while 7mm or 9mm pin spikes might offer more traction, the “christmas tree” style spikes might be a little more energy efficient, or ceramic spikes might be a little lighter, it’s ultimately a matter of considering the surface, the conditions, the event and, mostly, what’s worked for you.

And I don’t know what works for me! I never actually ran track, just did a couple of runs with my high school’s cross country team before bailing because reasons. But now I’m in the midst of a periodized training cycle for the Dipsea Race, and besides a longer distance, moderate pace recovery run and a hill climb workout, I’m doing some pyramid intervals on the track — this workout is a two mile warmup, followed by 100m, 200m, 400m and 800m ascending and descending with 400m rest laps and a one mile cooldown. Next week I’ll be including a fast mile in the pyramid.

The last week before the race, I’m going to do a test 10k so that I can calculate an estimate based on my Dipsea Quotient of .851 from last year. I realize that suddenly changing shoes to artificially deflate my time won’t actually change my performance on race day — I’ll be wearing my usual Merrells — but it’s an effort to get slightly more accurate data approaching my potential fastest time in the moment. Obviously, baselining yourself is going to be highly problematic: For example, a few days before last week’s workout, I smoked my way through an entire pack of cigarettes over two days. That had to hurt.

But if I confirm that the track spikes are significantly faster, at least on a track, it’s a variable I can eliminate in approaching my personal potential to help compare myself to other runners. Not that I care so much if I’m faster or slower, except as a matter of finding pace partners. What I really want is an invitation to the race next year, and for that I need to rate 450th. Which, according to last year’s results and my calculations, leaves me shooting for a 41 minute 10K time, or about two minutes faster than my personal record.

All of this back-of-the-envelope math and ultimately meaningless. The sample sizes are too small! It is literally impossible to control the experiment! There are too many variables! “You never know what’s going to happen on race day!” I will consciously work to forget about the data in the moments during the race. But going into the day with a good estimate of whether or not I’m in striking distance of my goal will help me make more informed risk-reward decisions, and if you’ve read the Dipsea application’s liability disclaimer, there are clearly some significant risks involved.

Back to the shoes: Are they faster? I’m pretty sure they are, at least a little. In the image above, you can see the spiked speeds (in red) versus the flat speed. The data isn’t necessarily conclusive because, again, small sample size. What’s most interesting is that, unlike in the first workout wearing my usual shoes where my second, descending interval splits were slower than the first, in the workout wearing spikes I got faster the whole way through. Most importantly, I was faster in the 800m, and by around five percent. Over 10K, five percent would mean a difference of two minutes, or enough to meet my pre-race track test goal.

It’s also about the margin of error I’m allowing for, so it could be anywhere from break-even to faster even than that. Of course, if I’m faster in the spikes on the track, then it will only increase my speed relative to the trail, changing the Dipsea Quotient, but then I know the course better as well, so maybe it won’t overall! And there’s where I hope for the real payoff: I keep wearing the same old comfortable shoes day in and day out to collect the raw data, and keep these slippers as a little magic for when I want to test the effectiveness of my drudgery.

How do they feel? That’s also hard to say definitively after one test — they did fit my foot comfortably for a 45 minute workout with light socks and at half a size smaller than I usually buy. They also are much more aggressive than even my “minimal” trail shoes (or similar cross country flats) thanks to the very stiff toe plate and relatively stiff but somewhat padded midsole. This meant that early in the run, my achilles tendon was highly activated as my foot strike was moved forward from where it normally lands and there was less foot flex.

Once I warmed up, the discomfort abated, but if you’re a heel striker or used to running on padded soles this would mean a pretty significant adjustment and you can also expect sore shin extensors. Where it really felt awesome was as I approached higher speeds, it was easier to confidently lean farther forward into my stride and tilt through turns more aggressively.

Where it really made a difference was the next day — the tight hamstrings and hips I’d experienced after running last week’s workout wasn’t nearly as pronounced. Some of that is probably acclimation, but my theory is that the the spikes saved my muscles a small bit of strength at the same relative effort, leaving me more kick as that day wore on and less soreness for the next.

Guess I’ll have to go conduct some more field research! So yes, I did buy some motivation, but only partly in the form of shoe company candy. Mostly it’s in the form of continued curiosity and therefore comes at a relative bargain. Plus they’re pretty, and totally match my running outfit, which does count.