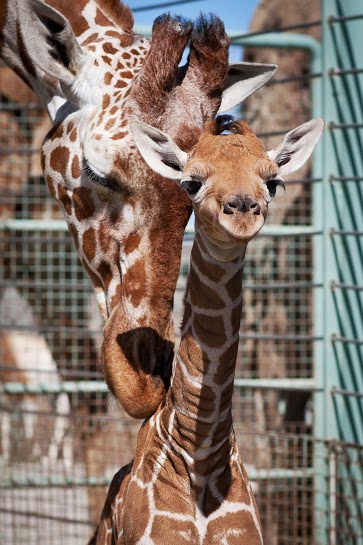 The female calf, who has yet to be named, was born to 11-year-old mother Kristin and father Floyd on May 22.

Her mother gave birth to her standing up after a roughly 425-day gestation period.

The reticulated giraffe calf is healthy and bonding with her mother in the giraffe lodge, mostly out of the public’s sight except when the pair ventures out to a side yard, which happens occasionally, zoo spokeswoman Abbie Tuller said.

However, in a few weeks, the calf will start exploring the open African Savanna exhibit, making it easier for visitors to spot her, Tuller said.

Giraffes, the tallest living land animals, can grow up to 18 feet tall and weigh up to 3,000 pounds, according to zoo officials.

During Kristin’s latest pregnancy—she has also given birth in 2006, 2007 and 2008 — zookeepers administered awake ultrasounds, which let staff monitor the health of the fetus.

Zookeepers said the new calf “has a lot of spunk” and that she is getting along with the other adult giraffes.

The growing giraffe herd also welcomed another young female giraffe last week when a nearly 2-year-old giraffe was brought in from the Rio Grande Zoo in Albuquerque.

The SF Zoo is located at 1 Zoo Road, at the foot of Sloat Boulevard.