SF City Officials Roll In For Bike To Work Day 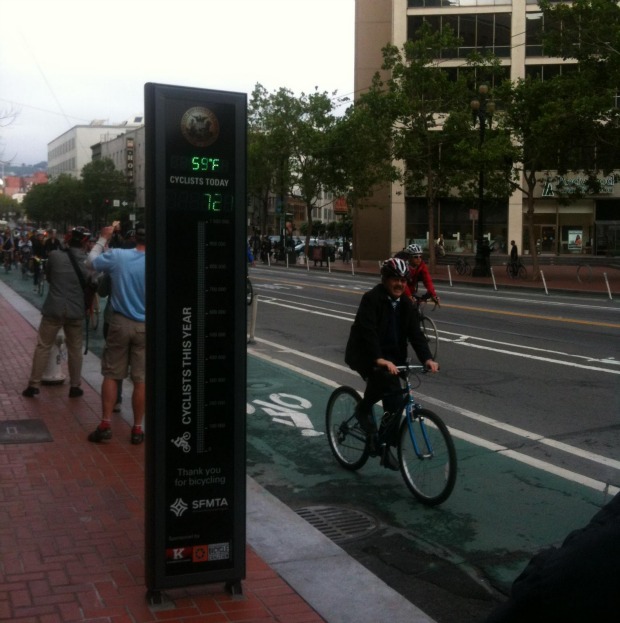 San Francisco Mayor Ed Lee clocked in as cyclist No. 729 on Market Street’s newly installed bicycle barometer this morning as he pedaled to City Hall for “Bike to Work Day.”

Lee, along with several city supervisors, San Francisco Municipal Transportation Agency staff and others, participated in the 19th annual event during the morning commute.

As part of this year’s theme, “Bikes Count,” those pedaling east on Market Street between Ninth and 10th streets were greeted by a new electronic bike counter that started tallying riders at midnight.

Volunteers from the San Francisco Bicycle Coalition waved signs and rang a cowbell along the bicycle lane near the barometer.

One biker passed by and yelled, “This is so fun!”

The counter, which displays the time, date, temperature, and the number of cyclists who have crossed an underground sensor there, boasted 755 riders as of 8:30 a.m.

The SFMTA, working with the bike coalition, installed the device to encourage bicycle use, and hopes to count 1 million riders on the thoroughfare within a year.

At a news conference on the Polk Street steps at City Hall this morning, coalition executive director Leah Shahum said there has been an increase in biking over the past five years—which she said benefits the city by easing congestion on roads and on buses, promoting healthy living, connecting families who ride together, and bringing in customers to local businesses.

Lee encouraged residents to take a ride along the waterfront, which he did this morning, passing the soon-to-open Brannan Street Wharf, the future home of the proposed Warriors arena at Piers 30 and 32.

Nearly all city supervisors pedaled from their districts, including John Avalos and Katy Tang, who traveled all the way from the Excelsior and Sunset neighborhoods, respectively.

Supervisor London Breed, whose District 5 includes the Fillmore, Western Addition, Japantown, Lower Haight and Alamo Square neighborhoods, welcomed the completion of the Oak Street bikeway this week, which she said will improve the biking experience for local riders.

“Our job is to make sure bicyclists are safe,” she said.

The Oak Street bike lane is part of an effort to connect the Wiggle, a bike route that begins near Market and Church streets, to Golden Gate Park.

Supervisor David Campos, who rode in from the Mission District, urged the mayor and SFMTA director of transportation Ed Reiskin to funnel more money toward bicycle infrastructure and other transportation alternatives.

“We need to make sure more city resources are invested in bikes,” Campos said.

Reiskin touted the benefits of bicycling on this day and throughout the year.

As part of the morning commute, 26 energizer stations were set up throughout the city, offering bicyclists free Bike to Work Day bags, stickers, cycling information, food and drinks.