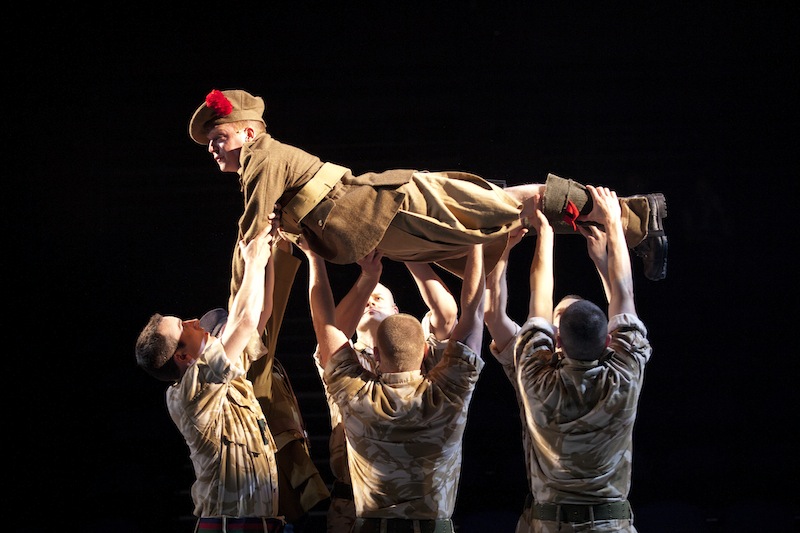 One of the first productions to come out of the recently established National Theatre of Scotland, Black Watch takes up the story of the country’s eponymous, elite military regiment – a centuries old national treasure, mired in Iraq at the time of the play’s conception. In 2004, the Black Watch was moved from Basra to what was known as the “Triangle of Death” to relieve an American corps about five times its number. The play follows a small group of soldiers stationed there, as well as in a Fife pub after their return.

For artistic director Vicky Featherstone, being Scottish, beyond choosing Scottish subject matter, meant avoiding classical play forms developed by the English – the sort we’re typically used to in theater – in favor of regional ones, such as vaudeville and music-hall revues. In Black Watch this takes the form of interspersed contemporary dance and song. The result is billed more as an “experience” than as theater in the usual sense.

An experience, it is. Aiming to subject the audience to the soldiers’ tale rather than simply tell it, the production involves deafeningly loud sounds of jets passing what sounds like a few meters above your head and intermittent enemy fire in the form of mortar blasts signaled by distant strobe flashes beyond the stage. It’s genuinely terrifying.

To this end, the production has required unconventional show spaces, including a former hydraulic laboratory, a market hall, and in San Francisco, the Armory Community Center – that brick hangar of a building on Mission and 14th Streets best known as the home of Kink.com.

The stage takes the form of a long esplanade, flanked on either side by audience bleachers. It is long enough that if you are seated close to one end, you could easily miss something taking place on the other side. On each end there are scaffolded lookout towers that the soldiers climb. These, in addition to the distant strobe lights standing in for distant mortar blasts, compellingly convey the feeling of being in a vast, desert war zone – something the Curran Theater could never have sustained.

The rave reviews that have come in for the play from across the globe tend to focus on the production’s heterogeneous approach. Indeed, it jumps from naturalistic war scenes to song to interpretive dance with incredible seamlessness. To give an example, in one transition from pub to combat zone, soldiers emerge from inside a pool table as though from a Trojan horse, cutting through the fabric from beneath and warily crawling out with strange, tense beauty. Equipped with such style, the play even manages to deliver a lesson on The Black Watch’s 300-year history in a way that is interesting.

There is room for criticism of Black Watch, though. Playwright Gregory Burke’s script remains documentary in its attitude, allowing for certain artistic liberties (the pub scenes are based on dramatized interviews; the Iraq scenes, on dramatized news articles).

On the one hand, this approach, doggedly intent on conveying the perspective of a group of soldiers rather than telling a dramatic story, saves the play from falling into the tired tropes of a conventional war story. On the other, the absence of a guiding narrative at times leaves the play rudderless. There were significant stretches of the second act that the production’s spectacle, in all its voluble abundance, could not save from dragging.

From an American’s perspective, the play’s Nationalistic motivations – the National Theatre of Scotland is the brainchild of the government’s National Culture Strategy – are also occasionally off-putting. The bitter attitude about the war might mesh well with that of San Francisco’s theatergoing audience, but scenes like the closing one, a spirited tribute to the military unit in the form of a drawn-out training exercise dance, set to a charging percussion track, leaves an uneasy aftertaste.

Ultimately, though, Black Watch is a welcome break from the strictures of conventional theater. It carries a distinctive point of view, with clear intentions and a brilliant cast, the members of which are equally compelling as soldiers as dancers – nothing short of an amazing feat. It is probably the best theatrical war piece I have ever seen.