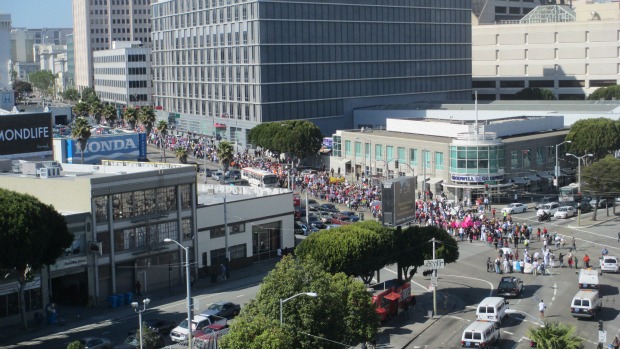 As many as a thousand protesters marched from San Francisco’s Mission District to Civic Center Plaza this afternoon to call for immigration reform as part of a massive May Day rally.

The demonstration, held on a day that traditionally rallies around the labor community, focused on immigrants’ rights as the U.S. Senate considers a sweeping immigration reform proposal.

The bill, crafted by the so-called “Gang of Eight” senators, includes a path to citizenship for the country’s estimated 11 million undocumented immigrants.

However, many at the march said they are concerned about those being excluded from the proposed policies, including same-sex families.

Amos Lim, 42, of San Francisco, came to the U.S. from Singapore in 1999 to be with his now-husband, an American citizen. Two years after arriving here his student visa expired and he faced possible deportation, but he was able to secure a green card through a job.

Lim, who was marching down Mission Street with Out4Immigration, said other same-sex couples are not as lucky, and need to be included in the language of the immigration reform bill.

May Day rally for immigration reform in SF [SFBG]
May Day march in S.F., rally in Oakland [Chron]

“We are sending a message to Congress that they need to support our inclusion,” he said.

The group is urging U.S. Sen. Dianne Feinstein, D-San Francisco, to include LGBTQ families in the Uniting American Families Act, which was introduced in the Senate in February. The bill proposes changes to immigration policy for bi-national partners.

Putri Siti, 19, who was planning to speak at the rally in front of City Hall around 5 p.m., said her family faced deportation back to Indonesia last year because of their undocumented status.

As she marched with the group ASPIRE, or Asian Students Promoting Immigrant Rights through Education, Putri said she came here with her family so she could have more educational opportunities.

Through help from a San Francisco immigrant advocacy group, her family was able to stay in the U.S. and she will attend the University of California of Berkeley in the fall.

“I’m marching to tell the government we need immigration reform now,” she said.

Self-identified undocumented immigrant Emmanuel Valenciano, 24, said he used to be afraid of deportation and was constantly worried about the future.

“We try to stay in the shadows,” he said. However, Valenciano, whose family is from the Philippines, is now urging others to mobilize.

He said he is marching to show that undocumented people are often criminalized and struggle because of a lack of job and financial security.

“We need a solution,” he said.

San Francisco police cars and other vehicles led the crowd of demonstrators and cleared the traffic on the streets through the Mission District to Civic Center Plaza.

A brass band played music, hundreds of signs and banners were on display and many community groups lead chants including the United Farm Workers’ rallying cry, “Si se puede,” or “Yes we can,” and “We are the people.”

San Francisco Supervisors Jane Kim, John Avalos and David Campos were marching together at the front of the crowd.