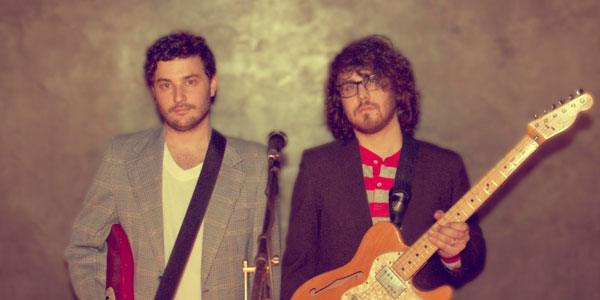 For a band that boasts as all-American a name as Dale Earnhardt Jr. Jr., it comes as a surprise that a major musical turning point happened to be a trip to Iceland. That summer journey shifted the duo from bedroom recorders and experimentalists to all-out performers hellbent on having a good time.

“When it comes to shows not all are great, especially if a band doesn’t show a lot of effort in engaging. We’ve always been nervous about being that band that you see,” Daniel Zott tells the Appeal.

“Josh [Epstein] had an experience in Iceland and we just took on this different vibe, especially in a live setting. We started getting into making music that gets groups moving as opposed to just listening on headphones. We are generally trying to make music we can share; not for private listeners.”

Make no mistake: Dale Earnhardt Jr. Jr. have always been a dance-conscious band, even if that dancing came from a listener’s private one-person disco. They hit the jackpot with a series of covers all recorded on the road in the form of the EP We Almost Lost Detroit.

Their next effort, a debut full-length entitled It’s a Corporate World acted as a fine mixture of twee indie and otherworldly electronics. Both were released just two years ago, yet already the band has grown in leaps and bounds.

“We have these super-pop covers and almost Beach Boys tribute staff that have kept fans interested,” Zott says.

Though slightly stripped down, their Patterns EP is a diverse jaunt through the many influences that color Dale Earnhardt Jr. Jr.’s world. Aesthetics have always been big for the duo, who are known for their vibrant, eye-catching suits as unique in pattern as their infectious EP.

It’s been a year since Dale Earnhardt Jr. Jr. played in San Francisco and they’re aching to get back, making Friday’s show at the Independent a treat for both band and audience.

“I love San Francisco. We have a friend who lives there and is always our tour guide, telling us where to eat and where to go,” Zott explains.

Zott and Epstein are happy to be back on tour to balance the push and pull of an at once introverted and extroverted musical existence.

“Playing live, that’s the most extroverted we get. In the studio I can zone out for twelve hours and not eat and just generally be a hermit,” Zott says.

“Then I’ll go out on tour and want to be where everyone else is at. That definitely works to our advantage.”

Catch Dale Earnhardt Jr. Jr. this Friday, May 17 at the Independent.