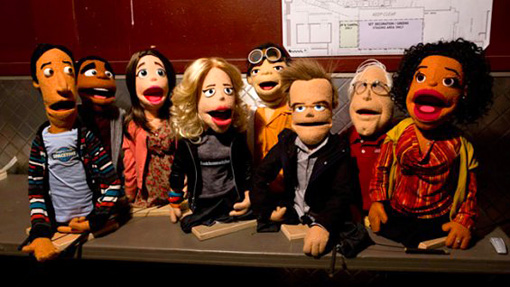 The days are getting longer and television choices are getting shorter, it can only mean that the 2012 – 2013 television season is winding down. It also means a ten thousand percent increase in the use of the word “penultimate.” Before we go on, let’s take a moment of silence for the Ben and Kates, Last Resorts, Animal Practices, 666 Park Avenues, Emily Owens MDs, and other freshmen series who are not here with us today. May we see them at Tha Crossroads so they won’t be lonely. Except Do No Harm. That was awful.

With the season finales of The Americans, Parks and Recreation, Vikings, (possible series finale for) Happy Endings last week, what else is on?

Monday, May 6:
Defiance (SyFy, 8pm)
Is it a video game you watch like a TV show, or a TV show you play like a video game? What is going on? I smell bread. Iffy trans-media ramifications be damned! This fun genre mash-up (lazy code word for, ‘it’s like Firefly’) takes place on a post alien contact/cataclysmic Earth and stars Grant Bowler, who most recently portrayed Richard Burton in Lifetime’s delightfully baffling Liz and Dick with Lindsay Lohan. All for more science fiction on television, anything to fill the Stargate shaped gate in my heart, really.

Rectify (Sundance Channel, 10pm)
Hey, remember Sundance Channel? They’re back! In prestige baiting scripted drama television form! The former home of Desmond Tutu and Richard Branson straight chilling has brought us the transcendent limited-run series Top of the Lake starring Elisabeth Moss (Mad Men, more importantly, Get Him to The Greek) and the indie-film-as-television-series Rectify (which just was renewed for a second season). Rectify, to paraphrase Grantland’s Andy Greenwald is ‘for people thought Treme moved too fast for them.’

Cribbing a line from the underrated 2008 Sean William Scott vehicle, Role Models: “You white, then you Ben Affleck.” Ergo, you watch Rectify, then you a TV Critic. To wit, white: Ben Affleck :: Rectify : TV Critic.

Tuesday, May 7:
Splash (ABC, 8pm, season finale)
ABC took Don’t Trust the B in Apartment 23 off the air and exiled Happy Endings to the Friday Night Death Slot for this. And Celebrity Wife Swap. Because the promise of Louie Anderson jumping into pools was (which was cut short by a rib injury sustained early in the competition) was easier to comprehend than James Van Der Beek playing an exaggerated version of himself.

Wednesday, May 8:
Psych (USA, 10pm)
I won’t be too broken up if this season of Psych would be its last. In February, it was announced that co-star Maggie Lawson has been cast in an ABC pilot opposite James Caan. This crop of episodes this season have largely felt flat. If this does turn out to be Psych’s last call, I know I won’t have any trouble finding another show to fold laundry to. USA Network is the leader in creating programming to fold laundry to, after all.

Thursday, May 9:
Community (NBC, 8pm)
I get it. As far as you’re concerned, Community ended last May after the much publicized ousting of creator/showrunner Dan Harmon. And the show that currently markets itself as Community is really an impostor that wears the name Community as a skin suit is a shambling corpse of an abbreviated and pushed back season that broadcasts its Christmas episode in April.

The Office (NBC, 9pm)
Penultimate episode before the series finale. And that’s my allotment of the use of penultimate for the week.

Friday, May 10:
Touch (FOX, 9pm, season finale)
Honestly surprised this is still on the air. Kiefer Sutherland and his son, Young Rainman Jr Adventures go on like Pi meets Early Edition. We’re all just numbers, man. Like when you would type in 80085 into your calculator and it would spell BOOBS. Everything is connected, man. Fibonacci sequence!

Vegas (CBS, 10pm, season finale)
Moving it from its original Tuesday night spot to the infamous Friday Night Death Slot in March was akin to having the show dig its own grave on a lonely stretch of road outside of Vegas. The obituary reads, “this could have worked well on cable!”

Saturday, May 11:
Orphan Black (BBC America, 10pm)
Straight killing it. America’s Best Dance Crew circa 2008 killing it. This ringing endorsement comes off the heels that the show has been picked up for a second season. Intrigue! Conspiracy! Clones! And star Tatiana Maslany’s performance pulls off what 99 percent of shitty one-person shows belabor about how the performer portrays over fifty different characters onstage! Only not a shitty one-person show!

You’re probably already watching all three. And in the case of Game of Thones and Veep, you’re most likely all on the same HBO GO account.

Bob’s Burgers (FOX, 8:30pm, season finale)
AV Club says it better than I can, but the triumph of Bob’s Burgers is the synthesis of old Simpsons style familial storytelling baked (flame broiled?) in with the hyper absurdity of the best fare on Adult Swim.

See you next Monday! And remember: