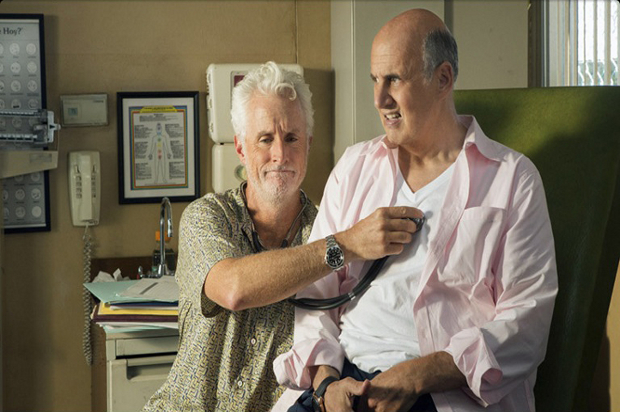 Everybody! ARRESTED DEVELOPMENT IS IN SIX DAYS! Are you ready to have your unrealistic expectations just barely met, or is the hype too much to handle and you’re already crafting your Arrested Development backlash piece? Between this and the new Daft Punk album, I’m surprised there hasn’t already been a signifcant uptick in hype related aneurysms in the twenty-something set. Memorial Day has the potential to take on a new meaning this year; to pay tribute the people who were unreasonably disappointed by the new Arrested Development episodes because they couldn’t find anything else to believe in.

I only live by two rules: never tweet your heroes, and never freeze your bananas.

Speaking of Daft Punk, did you notice Dr. Tobias Funke, noted analrapist in Daft Punk’s promo for “Get Lucky?”

So, the television upfronts happened this past week. And while there are a multitude of other outlets that can better discuss the implications and network choices, take a gander at the 2013 – 2014 schedules. They all look like cars lined-up before a demolition derby. This time next year, after after all the recap grades have been assigned, after all the hashtags have been misused, most of those shows will have canceled written next to them. And then we’ll do it all again.

But let’s just focus on the now. And focus on James Spader’s decent-to-killer Kevin Spacey cosplay in The Blacklist trailer for NBC. So, what else is on?

Monday, May 20
Bates Motel (A&E, 10pm, season finale)
In high profile, non Storage Wars, non Duck Dynasty programming, freshman series Bates Motel wraps up tonight. Bates Motel, which was developed by Carlton Cuse, in his first post-LOST outing, has been renewed and will be coming back for ten additional episodes in 2014. How did I reconcile wanting to see more Vera Farmiga with a disinterest in any prequel television that’s not named Hannibal? Accidentally watch the second half of the pilot on Lifetime.

Motive (ABC, 10pm, series premiere)
From an EXECUTIVE PRODUCER of Dexter, guys! Big news! Revealing the killer and victim at the top of the show, Motive takes the police procedural, flips it and reverses it. Turning ‘whodunit’ into ‘why they do that?’ Former New Kid on the Block member Joey McIntyre plays the first victim. I just did half the job of what the show promised to deliver on. Motive runs a brand new episode on Thursday at 9pm, which will be its normal time slot going forward.

The post Super Bowl XLVII premiere in Canada (yes, Virginia, this is a Canadian production) was the highest rated series premiere of the 2012 – 2013 season, drawing in 1.23 million eyeballs. Using the current exchange rate between the US and Canadian dollar as a guide, the US premiere will garner about 1,217,700 viewers, with our viewers not smelling like maple syrup.

Tuesday, May 21
Awkward. (MTV, 10pm)
A fourth into its expanded third season order (from twelve episodes to twenty), it is a minor miracle that a show as intelligent, funny, and well-written can not only exist, but thrive in a post Jersey Shore, post Abraham Farrah Back Door Teen Mom Sex Tape MTV (thanks, Grantland!) world. Shoutouts to the great acting across the board with stand-outs Ashley Rickards and Nikki DeLoach.

Nashville (ABC, 10pm, season finale)
Solidly soapy Freshman drama Nashville ends tonight, and will be coming back for a second season of country musicians in Nashville, doing country music things in Nashville. It also helps that the musical numbers are good! Which is easy when T-Bone Burnett is the Executive Music Producer for the show (he is also married to the creator of Nashville, Callie Khouri). Starring Connie “Tammy ‘Mrs. Coach Forever’ Taylor” Britton and Hayden “Save a Dolphin, Ride Milo Ventimiglia for a while” Panettiere. It also has Powers Boothe leaving no scene he’s in un-masticated. And Bunny from The Wire! Did you know I lull myself to sleep every night to the super cut of every Tammy Taylor y’all y’all’d in Friday Night Lights? Now you do.

Modern Family(ABC, 9pm, season finale)
The ACLU campaigning to get Cam and Mitchell married is like the time Homer wrote to Die Hard and asked if he knew Mad Max. I tuned out last season, so I can’t offer up a fair assessment of how this season was, although with Modern Family being compared as the Yankees of sitcoms, I can only imagine how it was. Sports metaphor!

Thursday, May 23
Save Me (NBC, 8pm, series premiere)
Anne Heche, after surviving a near-death experience starts to hear the voice of God. God is verb, which is what an acting teacher I had in high school told our class, shortly before leaving abruptly and never being seen again.

Fatal Encounters (ID, 9pm, third season summer premiere)
Investigation Discovery is the FUEL-TV of shows about violence either committed on or perpetuated by women. I’d wager this is a show about the former.

Saturday, May 25
Ultimate BBQ Cookout Countdown (ABC, 9pm)
You know what they say: “it isn’t a Memorial Day Weekend BBQ unless day time food centric talk show The Chew gets a prime time special about BBQ across America. Prime time meaning Saturday at 9pm, but who’s counting? Time is a man-made perception anyway. You ever Doctor Who at all? Start with Blink.”

Fact: You do not want ribs that has meat that ‘falls off the bone.’ Meat that falls off the bone is a false standard to hold ribs against, all that it means is that the preparer either parboiled or steamed your ribs before preparing, which washes away all the ribby goodness. You’re not getting ribs anymore, you’re getting served stew bones. And Carl Weathers is gonna come over, ’cause baby, you got a stew going. What you wanna look for is rib meat that while tender, still is able to put up a little bit of resistance. Bite marks, while not end all be all, are a decent indicator. Think of the texture of a well prepared steak. Or a firm stick of butter (what, I can’t be the only one who eats sticks of butter by themselves on Saturdays?)

Sunday, May 26
Arrested Development (Netflix, launches at midnight, PST, season premiere)
Let’s be honest, you’re just going to be watching the new Arrested Development episodes on a loop from 12:00am PST on, right? Feeling sorry for everything else that is airing tonight. Including, but not limited to:

Behind the Candelabra (HBO, 9pm)
Based on book of the same name, the Steven Soderbergh directed telefilm starring Michael Douglas as Liberace and Matt Damon as his much younger, live-in lover Scott Thorson. With Soderbergh taking his sabbatical from filmmaking, could this be in a step in the direction of him getting into television directing? Please say yes.

Thank you based Alan Sepinwall.

ICYMI:
– The Bang Bus of torture-as-plot-device Neo-Con television spectacle, 24 will be returning as a twelve episode, limited series (Limited series? What up Top of the Lake prestige drama bait money). Howard Gordon (former showrunner of 24, now Executive Producer of Homeland) will be returning, and looking to bring back the original writing staff onboard as well. Which sounds like coming back home after freshman year of college and not shutting up about Max Weber (Mom, it’s pronounced, Ve-bah, stop being so Western in your thinking). This is perfect timing for Kiefer Sutherland, as his latest show Touch has been officially canceled. FOX is trying to Keep The Keef (KTK, yall, hop on it) on television.

– No matter how the new Arrested Development episodes pan out (for all intents and purposes it will probably induce The Rapture), we’ll always have insertmeanywhere.biz. Tobias Funke in a multitude of outfits behind a green screen, tailor made to be inserted, well, anywhere? You crazy for this Arrested Development! You crazy! Here’s a smattering of some of the best Tobias insert me anywheres.

And remember:
Countdown to final episodes of Breaking Bad: 109 days