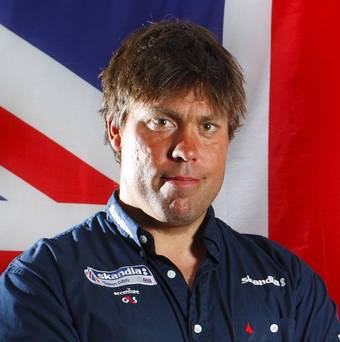 America’s Cup race officials said today that they are reviewing the safety of the boats being used in September’s regatta in San Francisco following the death of a sailor Thursday in a capsizing during a practice run.

Andrew “Bart” Simpson, 36, a member of the Sweden-based Artemis Racing team, died following the capsizing in the Bay shortly after 1 p.m. Thursday.

Officials held a news conference at race headquarters in San Francisco this morning to discuss the death and how they plan to move ahead with the sailing races that begin in July and end with the America’s Cup Finals in September.

Regatta director Iain Murray said Simpson was aboard the Artemis Racing AC-72, a 72-foot catamaran that nose-dived and went into the water upside down.

The boat was broken into many pieces and it appears Simpson was trapped under some of the solid sections of the yacht, Murray said.

Simpson was “out of view, out of sight for the myriad of people on board trying to locate him,” Murray said.

The sailor was eventually found after about 10 minutes and CPR was administered while he was taken ashore to the St. Francis Yacht Club. However, Simpson could not be revived and was pronounced dead at 1:43 p.m., San Francisco fire officials said.

The sailors “are a bit like a big family,” Barclay said. “When something happens to one of our members, we all feel the loss.”

Practices have been suspended for the next three days for teams in the regatta and Artemis Racing officials have not indicated whether they plan to continue in the races, Murray said.

He said while San Francisco police are conducting an investigation into the death, America’s Cup officials will conduct their own investigation to see what, if any, changes should be made to the 72-foot boats or other aspects of the races.

“We take the safety of our sport very seriously and respect the ocean at all times,” Murray said. “We are constantly trying to improve the way we manage these boats.”

He said the area where the capsizing occurred, a “triangle” between Treasure Island, Angel Island and Alcatraz Island, was not part of the planned race course and that there are no plans to alter the course.

He said the area of the capsizing was “a windier spot on the Bay” but it also “wasn’t extreme conditions.”

Artemis Racing chairman Torbjorn Tornqvist issued a statement today about the death of the team’s sailor.

Tornqvist said Simpson “was central to Artemis Racing, both in the course of racing and our lives. His presence and personality was a binding force and he will be missed.”

Tornqvist said, “Right now, the primary focus of Artemis Racing is on the well-being of our team members and their families, and the America’s Cup competition will remain second to that.”

He said the team “will conduct a thorough analysis and review of this accident and will be looking at how the risks inherent to such competitive sailing can be limited in the future for the safety of the team and all competitors in the sailing community.”

Simpson won two Olympic medals in sailing, a gold medal in the 2008 Beijing Games and a silver medal in the 2012 Games in London, according to team officials.