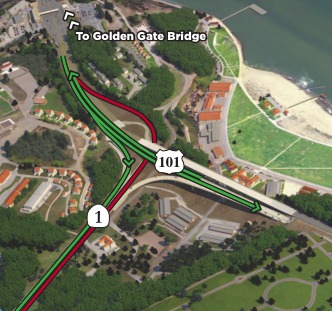 Overnight closures of state Highway 1 begin this week in San Francisco’s Presidio as construction crews dismantle the last remnants of the old Doyle Drive approach to the Golden Gate Bridge.

Northbound Highway 1, also known as Veterans Boulevard, will be closed between Lake Street, on the edge of the Richmond District, and the junction with U.S. Highway 101 starting Tuesday. The closures will run from midnight to 4 a.m. on Mondays through Saturdays for three weeks, project officials said.

The old Doyle Drive, built in 1936, was seismically unsafe and is being dismantled to make room for the new roadway, which crews expect to begin construction on this summer as part of the second phase of the Presidio Parkway project, project spokeswoman Molly Graham said.

Last year, most of Doyle Drive was demolished and a temporary bypass was constructed, as was a bi-directional High Viaduct and Battery Tunnel taking traffic between San Francisco’s Marina District and the Golden Gate Bridge.

The remaining part of Doyle Drive, the steel truss and columns of the old High Viaduct, “requires much more delicate deconstruction,” prompting the overnight closure of Highway 1 and nearby surface streets, Graham said.

Once that part of the project is complete, crews will build a second High Viaduct and Battery Tunnel to allow one to carry northbound traffic to the bridge and the other to carry cars headed south away from it.

Work is already under way to identify and relocate utilities and demolish buildings elsewhere on the project, which will also include new tunnels near the Presidio’s Main Post.

Dave Pang, a Caltrans construction manager, said that work can often be halted by the discovery of historical items found underground in the Presidio.

During the first phase of the project, items found included a large walrus tooth and army equipment, Pang said.

The new roadways, once complete, will provide the same traffic capacity as the old Doyle Drive but with additional safety measures such as shoulders on the side of the road, Pang said.

The project is expected to be complete sometime in 2016.

More information about the project, including updates on road closures, can be found online at www.presidioparkway.org.